Poetry buffs and others were in for a treat earlier this month as they crammed themselves into Lutnick Library’s multimedia room. The attraction was a pair of readings by Visiting Assistant Professor of English Thomas Devaney and the renowned poet Eileen Myles, sponsored by the Creative Writing Program at Haverford.

Myles has been a mainstay in the New York writing and arts scene since the 1970s. With over 20 published works of poetry, fiction, and nonfiction, their writing is concerned with issues of identity, politics, and even occasionally their pet dog. Myles’ other accomplishments include serving as the artistic director of St. Mark’s Poetry Project in the 1980s, running independently in the 1992 presidential election, and receiving an array of awards for their poetry including a Guggenheim Fellowship and the Shelley Prize from the Poetry Association of America. They are the rare celebrated literary icon who is not only active and popular on Instagram, but who also had a television character based on them (Leslie Mackinaw on Transparent).

“I invited Eileen to Haverford because they are one of my favorite living poets and people,” said Devaney, an award-winning poet and Pew Fellow. “In all of their writing, Eileen has taken inclusion to another level of brave openness.” 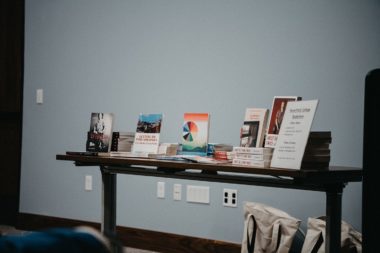 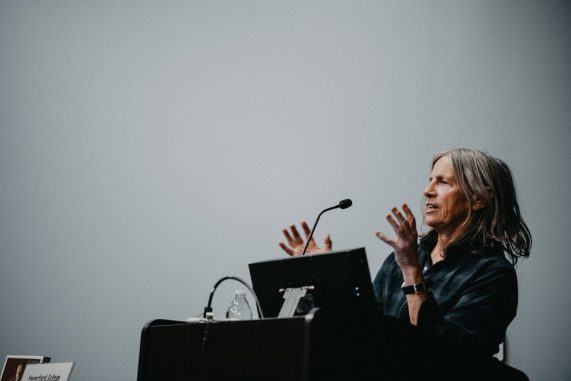 Myles’ reading was marked by their conversational style.

Devaney’s reading, which included poems from Getting to Philadelphia and You Are the Battery, two collections both published this year, took up the first half of the evening. The poems, delivered to a full house, showed Devaney exploring topics of representation and reflection, often set in the scene of his native Philadelphia.

“I felt that I was in my element on Thursday night,” Devaney reflected. “It’s a rare feeling. Thinking about my books published this year, the reading also felt like a kind of homecoming.”

After a two minute break for refreshments, Myles took the stage, reading their work in a rhythmically flowing and witty voice, inflected by their native Bostonian accent. Myles impressed the audience just as much in the interludes between their poems, where they’d sandwich in humorous anecdotes or explanations for the poetry, in addition to promising a signed copy of a canine cop-themed calendar for one lucky purchaser of their book in attendance.

“It was interesting how conversational her poetry reading was,” said Teruha Stergios ’20. “She would be reading it in a very natural way rather than a structured formal poetry way. And she would stop in the middle and explain stories and then keep going.”

Myles’ reading captivated the audience, some of whose members had attended an open conversation with the poet held earlier in the day.

“So many people around me seemed to have a notebook out,” said Becca Richie ’20, “ready to catch each word Myles spoke.”