For Yuying Rong ’20, the idea to document her moments in laboratory through art began at the lab bench during her summer research after her first year at Haverford.

“It all started when I was waiting for centrifuge or loading assay wells in [Assistant Professor of Biology Kristen Whalen]’s laboratory, fueled by KINSC’s request that students receiving funds should present their research experience in some way. As a first-year student, I didn’t have much complex, awe-arousing science to share, but I believed my experience of transitioning from little laboratory background to a cutting-edge science laboratory was engaging and potentially empowering to other first-years.”

She decided comics would be the best means of documentation, because, as she said, “comics [are] direct, engaging, and certainly the best medium. Plus, I get to practice comic-making.” At the Haverford Undergraduate Research Symposium, Associate Professor Helen White discovered her comics and suggested she make an exhibit.

Rong has loved drawing since she was young, and appreciates the unique opportunities the medium extends to both artist and audience.

“Besides being accessible and direct, [comics’]  spatial, sequential, and temporal parameters allow infinite manipulation of reader experience to achieve my storytelling goal. I am currently seeking an ultimately economic use of graphic elements to effectively convey feelings; line and space create the paradise for my experimentations. As an artist, I believe the mission of artists is to express what, in one way or another, cannot be said explicitly, and art is the glass that artfully bends the truth.”

Rong’s comics are spread out deliberately across the five buildings that make up the KINSC.

“I scattered all my work around the buildings according to their birthplaces, and called the space a ‘physical memory palace leakage.’” (Continued after the gallery.)

The autobiographical comics are hanging throughout the KINSC. 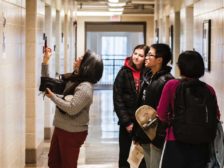 Students and faculty, like Dean Theresa Tensuan (left), enjoy the comics in the KINSC 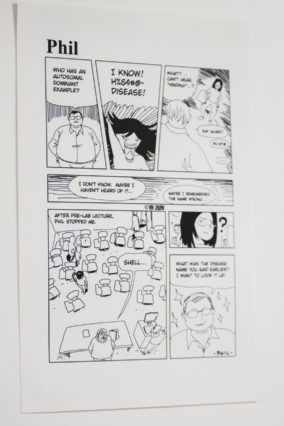 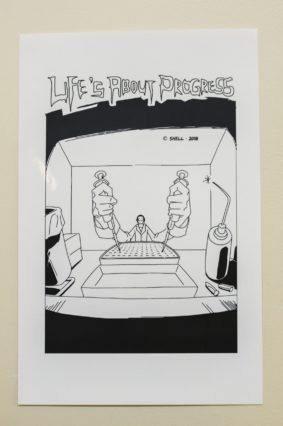 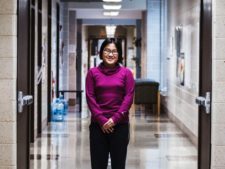 Yuying Rong in the KINSC, where her autobiographical comics about life in the sciences at Haverford are on display. 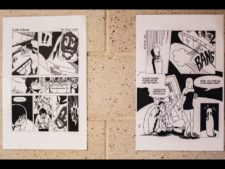 The comics cover a range of stories from the artist’s experiences, from her struggle to reconciling the disparate cultural statuses of art and biology  to encountering mice in her apartment.

“As I went deeper in preparation for the exhibit,” she said, “I incorporated more elements from my classroom and research experiences at Haverford, the Tri-Co, and beyond. I wanted to share my hindsights with fellow students, and to whisper to those who are struggling that they are not alone.”

For an example of one of the “comics about struggling,” Rong points to Stress, a comic that recounts a class field trip ending in an emotionally trying bus ride home for one of her peers.

“We all stopped talking at the sight of our College Ave. sign. One student burst out, ‘I wasted an entire day, did nothing!’ and immediately covered it up by saying, ‘But I’m gonna take a shower and tell myself it’s okay. I went on a trip with the class, had a good time, and saw whales.’ It shook me to see a student had a moment of vulnerability and automatically tried hiding it under a profile of ease. Being excellent liberal arts students, many are accustomed to maintaining a ‘perfect’ appearance, so I drew this moment to tell students that they were not alone.”

As Rong becomes braver in expressing her dedication to art in front of her colleagues in science, In her coursework, Rong found that “many people internalized an equation: art plus science equals scientific illustration.” She wanted to combat that notion with her comics, saying, “I want to show people how science is done, and that human interactions determine what is studied, what is available, how it’s studied, how it’s interpreted… Science is not dry facts and scary papers which impersonal white [coats] publish.”

Ultimately, Rong sees the exhibition as a chance to revel in and celebrate the humanistic essence of science. Quoting marine biologist Nick Pyenson, Rong sees her comics as an extension of the idea that “the best stories of scientific discovery are, at their heart, stories about people. … scientists are real people, too, with inner lives that sometimes bear on their work.”

Lab Comics will be up throughout the Marian E. Koshland Integrated Natural Sciences Center through the end of the semester. Rong is grateful to KINSC Director and Associate Professor Helen White and KINSC Associate Director Marielle Latrick for their support, and to numerous others who encouraged her along the way.