While the winter skies may be gray outside, the walls of VCAM showcase bright blue textiles in an end-of-semester exhibition The Power of Words, an exploration in traditional Japanese indigo dyeing by the students in the “Advanced Japanese” course.

“We spent a lot of time analyzing texts talking about traditional indigo dying that uses a plant called dyer’s knotweed (藍) and artificial dyes,” said Michelle Lin ’20,  “The contrast between ‘traditional’ and ‘modern’ takes on indigo dying was a big focus on the unit. As a result, this project, in which we used a powder dye made from a plant, let us apply what we learned in class and get a sense of the process that indigo dyers in Japan had to go through during Edo period.”

At first glance, it may seem unexpected for a course in Japanese language-learning to include such an artistic element of visual culture as indigo dyeing, but Lecturer in Japanese Kimiko Suzuki emphasized the overlap between this art form and education in Japanese language for students in her “Advanced Japanese” class.

“This is a multi-media project designed to teach advanced students one of the more sophisticated aspects of Japanese language,” said Suzuki. “Namely, how words can assume different meanings in different contexts.”

“Indigo dying (藍染／a・i・zo・me) is one of the traditional dyeing methods in Japan,” she said. “After the Western-influenced industrialization and modernization of the late 19th century, the traditional indigo-dying method, which used natural indigo, was largely replaced by chemical processing. After learning about the historic and political backgrounds of indigo dying and the criticism toward the shift from natural to industrial process, we participate in an indigo-dyeing workshop at the rikumo store [in Center City Philadelphia]. To conclude the course module, we exhibit our indigo-dyed cloths on campus to share our experience and interpretation of the metaphor.” (Continued after the gallery.) 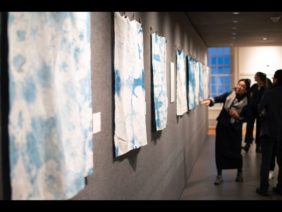 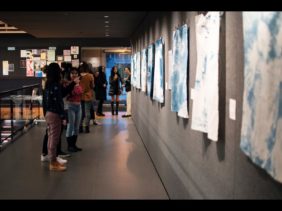 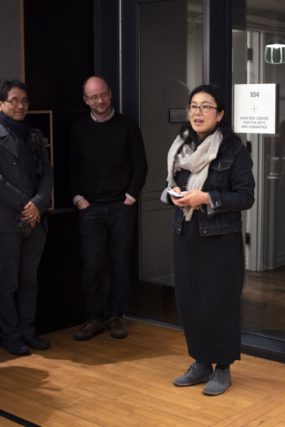 Kimiko Suzuki introduces her class and their work at the opening of “The Power of Words,” which showcases indigo-dyed textiles made by students in the course. 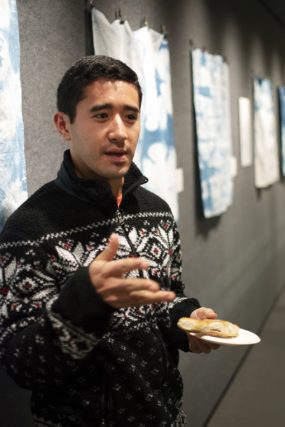 Scott Kozarski ’21 explains the process of dyeing the textile at “The Power of Words” exhibition opening reception. 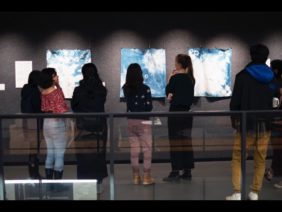 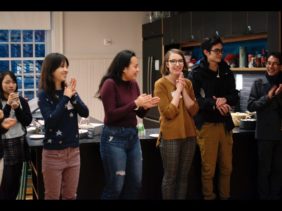 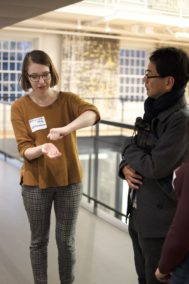 Jill Zimmerman ’19 describes how they dyed the textiles. 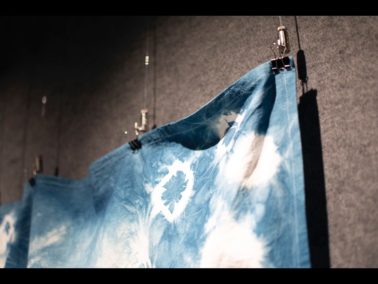 A close-up of the indigo-dyeing patterns at the exhibition’s opening.

With support from Suzuki’s friends and owners of rikumo Kaz and Yuka, the John B. Hurford ’60 Center for the Arts and Humanities, the Bi-Co Japanese Program, and a grant from the Luce Initiative for Asian Studies and the Environment, the exhibition, which is on view through December 10, marks a unique connection between art and language for the students involved.

“When we were preparing our pieces of cloth before putting it in the dye, we had no idea how the indigo stain would come out,” said Lin. “I realized that this practice takes a lot of time and skill, and you don’t necessarily have control of the outcome. In Japanese learning, you’re constantly reviewing old concepts while learning new concepts, and, overall, just like any language, you need a lot of practice. In the end, you’re surprised by how far you’ve come and so I think that experience in learning a language is similar to indigo dyeing.”

Lin also wants to emphasize that the lessons learned in “Advanced Japanese” extend beyond the exhibition and represent a fulfilling culmination of her Japanese studies at Haverford.

“ ‘Advanced Japanese’ is very different from ‘First Year’ to ‘Third Year Japanese’ classes in that you engage with different texts and aren’t confined to a textbook,” she said. “Just this semester, we watched multiple videos and movies and read manga that related to the topic of the class. In addition, I’d say that the topics we learn about are so much more thought-provoking than the content in introductory classes. Being able to talk about diversity and sexism in Japanese is something I never thought I could do last year, and so I highly recommend taking the course with any Japanese professor —they’re all great!”

For the Haverford community, Suzuki echos her student’s sentiment in encouraging Bi-College students to explore the Japanese program and hopes the indigo-dyed textiles reflect the heart and passion that went into creating and learning about the work.

“First, I’d like them to know about the ‘Advanced Japanese’ course, and learn what we do in the course,” Suzuki said. “Then, I want them to enjoy the textiles—the design, the multilayered blue colors, students’ reflections—along with learning about the indigo-dyeing culture in Japan from historic, social, and political contexts. My secret agenda is to expand student interest in taking Japanese courses!”