‘Tis the season again for the annual Lloyd Lights decorating competition, and the results are in: Norris, in a recent historic first, has won first place, and Kinsey second! As the voting period drew to a close over the weekend, Lloyd residents went into decorating overdrive, decking out their dorm entrances with all manner of Christmas swag. Life-size blow-up reindeer, Santas, and snowmen (including even Olaf from Frozen) topped the roofs and sat in the bushes; strings of white, red, green, and rainbow lights were artfully wound around columns and window-frames.

“I have always enjoyed seeing Lloyd Lights, so I was really excited to participate in the tradition this year!” she says Lloyd resident Ellen Schoder ‘19. “It was also a lot of fun getting to know the other suite, planning out design with them, and putting up the lights together.” (Continued after the gallery.) 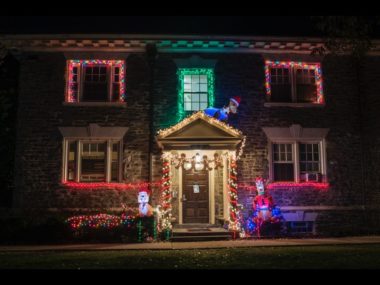 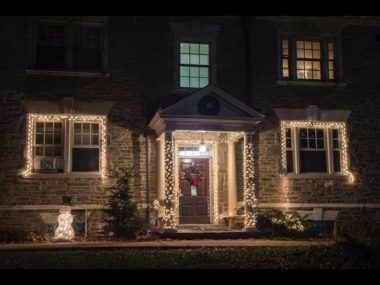 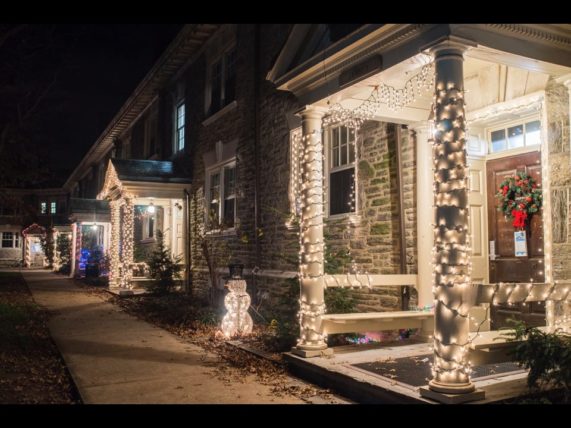 Lloyd Lights has been a campus wintertime tradition since at least the early 2000s. (Do you know its origins? Please let us know!) This year, Students’ Council co-heads Maurice Rippel ’19 and Andrew Eaddy ’19 provided each Lloyd entranceway (Norris, Logan, Kinsey, Smith, Strawbridge, Stokes, Morris, Leeds, and Janney) with $50 each to purchase materials, after which they had until December 7 at 5 p.m. to submit a photo of their handiwork to Students’ Council via email. Voting by the student body opened right afterwards and lasted until December 9 at 6 p.m. Just three-and-a-half short hours later, at 8:32 p.m., the first- and second-place winners were announced in the weekly consensus. The residents of Norris will receive $50 and the residents of Kinsey $25 to split among themselves. But the rewards go beyond just the financial.

“It’s so nice to see how all the Lloyd suites bond over this magical tradition,” says Sophie Titlebaum ’20. “Walking by Lloyd at night with all the lights is a great way to get everyone in the holiday spirit, to finish off the semester strong.”

It’s a sentiment Shaun Fedrick, also a member of the class of 2020, echoes.

“I’m really glad to see that people make time for having fun even though the semester can be so stressful,” he says.

Just because the student-voting period is over doesn’t mean you can’t make your voice heard! Vote for your favorite entryway decorations through the end of the year.