The “Legacy of Lynching” symposium, held on Nov. 16 in conjunction with the multimedia exhibit of the same name currently on display in the Cantor Fitzgerald Gallery, provided an eight-hour-long look into a particularly egregious chapter of American history. Organized by Assistant Professor of English Lindsay Reckson, it was intended to honor those victims of racial violence who have become household names—Emmett Till, Jesse Washington—as well as those whose stories have been lost to time or public apathy.

Thomas Miles Sr. is one. A black man who owned several small businesses in the town of Shreveport, La., in the 1910s, he was beaten, hanged, and shot by a furious mob—all for allegedly passing a note to a white woman. His story is the subject of the short film Uprooted, which is currently being shown on a loop in the gallery as part of the Legacy of Lynching exhibit. One of the 12 panelists Reckson invited to speak at the symposium, in fact, is his great-granddaughter: author, activist, and documentary filmmaker Shirah Dedman. Currently invested in “creating content that reflects the intersection between economics, race and the environment,” in her words, she serves as something of “a conduit for other people whose family members have been lynched.”

In doing so, Dedman, along with the other panelists, has “been helping to cultivate a long-overdue public conversation and reckoning with white supremacist violence in its most extreme and most mundane forms,” says Reckson. “They are helping us to see the history of lynching not as an aberration, or as belonging to a distant past, but as something that continues to shape our present. And they are also helping us to envision what an alternative world might look like.”

Besides Dedman, those panelists included screenwriter Allison Davis; artists Josh Begley and Alexandra Bell; photographers Rog and Bee Walker; curator of the Cantor Fitzgerald Gallery exhibit Kalia Brooks Nelson; and academics from Princeton, Rutgers, Occidental, Ohio State, and Haverford. In a series of three panels covering the history of lynching and modern-day antiracism movements and the role of art in narrating and comprehending episodes of racial violence, they spoke eloquently on their thoughts regarding racism and its manifestations in past—and modern—America. (Continued after the gallery.) 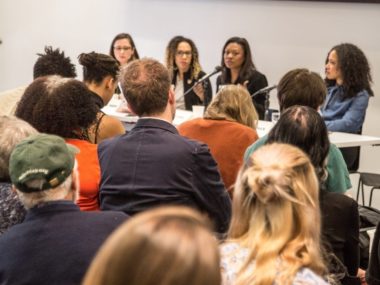 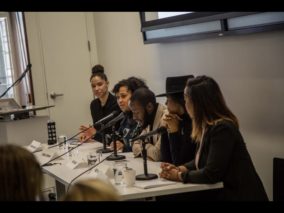 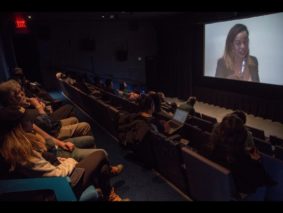 The packed symposium needed an overflow room in the VCAM Screening Room to accommodate those who wanted to attend but couldn’t find seats. Video of the panels was simulcast.

“Engaging with something like this, there’s a deep sense of sorrow and sadness, not only on a personal and familial level but on a cultural level,” said Bee Walker. “But we need to acknowledge the impact, to say, ‘Okay, this is something that happened long ago and far away, but it still affects real people.’ ”

Davis agreed, emphasizing the need to humanize victims of lynching, who are so often reduced to names or battered faces in history textbooks and news media.

“There’s a need to show that this a person who has lived and loved and had everyone over for dinner on Sundays,” she said, “just like the rest of us.”

Citing one of the pieces featured in the Cantor Fitzgerald Gallery exhibit—Ken Gonzales-Day’s “The Wonder Gaze (St. James Park),” a version of the famous photograph “The Lynching of Tom Shipp and Abe Smith at Marion, Indiana, August 7, 1930” that has been digitally altered so as to direct the viewer’s gaze towards the white mob clustered in the foreground rather than the black bodies dangling from tree branches in the background—Dedman brought up what she sees as a significantly problematic trend: the focus on the perpetrators of lynching rather than their victims.

“Our natural reaction is the look at the crowd,” she said. “This photo is for the white gaze, to help white people understand lynching. But it’s important to see stories from multiple perspectives.”

Or, as Davis put it later, “Words mean things. The lion is going to tell a different story than the lamb.”

And therein lies the significance of their work: by presenting viewpoints that are all too often marginalized, it engenders empathy across racial lines—empathy that is sorely needed at this moment in American history, when, in a disturbing evocation of the post-Reconstruction South, hate crimes are on the rise and white nationalist rhetoric is gaining ground among even mainstream audiences.

“One of the things we hoped to highlight with the exhibit and the symposium was how important art-making can be a site of social justice work,” Reckson says. “Some of the questions we asked ourselves as we put together the exhibit were: How do we think about art that is deeply and robustly engaged with some of the most pressing concerns of our moment—racial and economic injustice, mass incarceration, police violence, human rights violations—without being strictly indexical or reducible to those concerns? How does art testify to the historical conditions that produced this moment, and how does it grapple in sustained ways with questions of memorial, reconciliation, reparation? How do we tell the story of a past and a present that are rife with white supremacist violence, while still highlighting historical and contemporary forms of resilience, of irony, of protest, of community-building?”

These are questions of enormous significance, and, consequently, questions that are difficult to answer. What the “Legacy of Lynching” symposium did, however, was carve out a physical and an intellectual space where people of every race could consciously ponder them.