“When I started in this position in Gest last December, it seemed the lounge was not often a lively gathering place—almost, rather, a holding place where people would sit while waiting to talk to the faculty in their offices,” said Administrative Assistant Elana Wolff. “Since the renovation, I’ve seen people come together with intention, for discussion groups, for quiet study time during the day, or even to meet for lunch.”

Thanks to a combined effort between the religion and philosophy departments, following an original renovation plan by David Harrower in facilities, new life has been breathed into the space more closely aligned with the vision that Margaret Ralston Gest had for the space, which features many of her artworks across numerous mediums.

“The vision of Margaret Gest is to bring our diverse religions and cultures together in deep dialogue to honor true diversity and cultivate common ground and creative unity across and between diverse worlds,” said Ashok Gangadean, the Emily Judson Baugh Gest and John Marshall Gest Professor of Philosophy.

Born into a prominent Philadelphia family in 1900, Gest became a celebrated artist whose work often “defied categorization,” according to Art Registrar Rachael Beyer. From neo-impressionism to cubism, tonalism to precisionism, Gest’s paintings, drawings, and pastels refused to be confined to norms, much like the artist herself. Although Gest’s art can be found in both the Smithsonian American Art Museum and the Philadelphia Museum of Art, Haverford College has the largest single holding of Gest’s work, with more than 300 accessions in the collection.

“In some ways, it is surprising that Gest left the bulk of her estate to Haverford, in that she had no family ties to the school,” said Beyer, who curated the collection. “However, she did grow up a voracious reader of the classics in her parents’ extensive library and was part of the Wider Quaker Fellowship as an adult.” In that vein, Gest’s will left much of her holdings to the College for the establishment of a “center of cross-cultural study of religions and their surrounding cultures.”

Decades after her death, Beyer, Wolff, and the faculty in both departments are excited to support the intentions for the space that Gest and her partner, Miriam Thrall, carried.

“The process of selecting pieces to display, in conjunction with Rachael, in order to showcase both the beauty and the breadth of Gest’s work, was delightful,” said Wolff. “We made, I think successfully, an effort to select pieces that would provide interest and a sense of community.”

Religion and philosophy students and faculty gathered to celebrate the reopening and reclaiming of the space with a reception highlighting the art installations and mission of the new space. To further the student-focused mission , the Gest funds also support four student ambassadors, who hold “open hours” for student-led programming on Sunday through Wednesday nights from 7–10 p.m.

Said Wolff, “The whole idea is to see what the students themselves want [the lounge to be], and what matters to them. The sky’s the limit!”

Snacks at the Gest Lounge reopening. 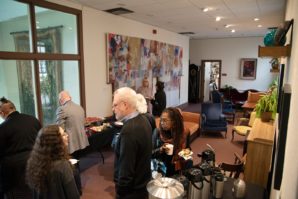 Some of Gest’s art is up in her namesake lounge. 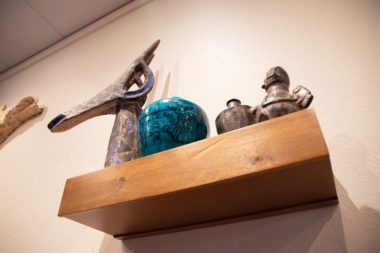 Some of the objects on display in Gest Lounge.

Guests check out the revitalized space and art in Gest Lounge at the opening.