Through December 10, the Haverford Fine Arts Department is celebrating the storied career of celebrity chef Edna Lewis with a photography exhibit, Edna Lewis: Chef and Humanitarian, in the Marshall Fine Arts Center. The recipient of the James Beard Foundation’s first-ever Living Legend Award, Lewis, who died in 2006 at the ripe old age of 89, is often credited with spearheading the revival of Southern cooking that occurred throughout much of the mid-to-late-20th century.

More than that, though, she was, for many, the living embodiment of the American dream. Born to the children of emancipated slaves—and in the Deep South at a time when Jim Crow laws were still very much on the books, no less—Lewis overcame poverty and prejudice to ride a wave of culinary praise all the way from her rural Virginia hometown to New York City, where she cooked for Tennessee Williams, Truman Capote, and William Faulkner at Café Nicholson. Her second cookbook, The Taste of Country Cooking, which went to print under the watchful eye of none other than Julia Child’s editor Judith Jones, remains a classic of the genre. And the U.S. Postal Service’s 2014 decision to commission a commemorative stamp in her honor ensured that her legacy lives on—even on household envelopes.

Photographer John T. Hill, who met Lewis when he was hired to photograph her for her first cookbook and found himself charmed by her “warmth and wit,” took it upon himself to chronicle her twilight years. Throughout the 1970s and 1980s, he would stop by Lewis’s sprawling Southern homestead to photograph her as she went about her day: picking apples, picnicking with her nieces and nephews, and, of course, cooking the classic regional comfort foods that by that then had become synonymous with her culinary style. His images, 40 of which are featured in the exhibit and 2 of which have been acquired by Haverford for its permanent collection, capture both the community and the sensuality inherent to the act of cooking. Pies cool on a stone wall; hands meet over a bowl of bread rolls; a knife slices through a chocolate-frosted pound cake. Displayed in cases around the room, too, are first-edition versions of Lewis’s four cookbooks, newspaper clips praising Lewis’s roast chicken and cheese soufflé, and children’s books that fictionalize Lewis’s life.

Though taken more than three decades ago, Hill’s pictures still have the power to strike an emotional chord. Says sophomore attendee Alexandra Iglesia ’21, a photographer herself, “The documentary photographs of Edna Lewis showed me how she deeply connected with her family through her joy of cooking family meals. As a college student, I tend to forget the importance of a family meal. Edna Lewis’s life and work reminded me of the significance in family connection.” (Continued after gallery.) 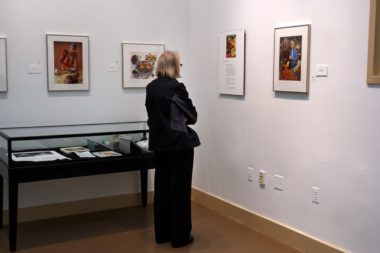 An attendee looking at the photography by John T. Hill of Edna Lewis. Photo by Alexandra Iglesia ’21

A family looking at the photography by John T. Hill of Edna Lewis. Photo by Alexandra Iglesia ’21 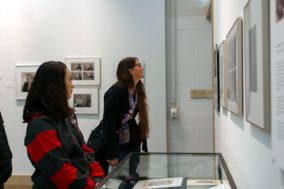 Attendees looking at the photography by John T. Hill of Edna Lewis. Photo by Alexandra Iglesia ’21 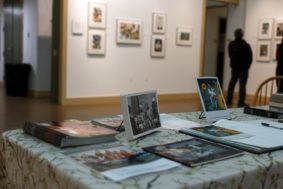 Hand-outs at the Edna Lewis Exhibition. Photo by Alexandra Iglesia ’21

For his part, Audrey A. and John L. Dusseau Professor of the Humanities and Professor of Fine Arts William Earle Williams, who helped organize the exhibition, believes that Hill’s photographs are significant in that they commemorate “a pioneer in inventing modern American cuisine and food practice.” “[Lewis made], through effort and an innate ability to incorporate the lessons of her childhood passed on to her by parents and friends, a difference in this world,” he says. “Hill’s photography documents and interprets this remarkable life and the environment that shaped it.”

And what better place to showcase them, in all their home-evocative glory, than a college campus—especially one where a sizeable portion of the student body lives several hours or more away?

“Like I said before,” Iglesia, a New Jersey native, says, “as a college student, at times, I feel solitary and forget what it is like to have a great meal with people that I love. I think that the Fine Arts Department made a profound decision to display the works of Edna Lewis to help remind us that food can be a positive way to connect us with each other. I hope other students take the time to go to the exhibition to view these beautiful photographs of the memorable chef.”