Along the Exhibition Wall on the ground floor of the Visual Culture Arts and Media Center (VCAM), five paintings and two drawings bring to life the profiles of seven Haverford students, each with distinct stylistic elements that render dynamic personalities. Coming to Terms, the series of portraits by Ainsley Bruton ’21, explores the changes in identity that come with adjusting to a new place like Haverford.

“When I first came to Haverford, I noticed that I was changing the way I saw myself and thought about myself,” explained Bruton, who is planning on declaring a fine arts major with a specialization in painting. “I took those feelings I was having and decided to do interviews with other members of my class about whether they were experiencing similar kinds of things, and I sought to represent what I talked with them about in a series of portraits.”

Bruton started the independent project last year as a first-year. In her interviews with six students, she asked questions about their lives and the feelings they were grappling with as newcomers to Haverford. The interviews informed the stylistic choices of her work. One, for instance, was painted with tighter brush strokes to express the subject’s anxiety about fitting into space at college. Another painting aims for a smoother texture to express calmness underlying the subject’s outward stresses.

“I wanted to make these portraits a representation of students’ identities,” said Bruton. “I’ve always loved portraiture more so than other forms of art because I’m very interested in people.” (Continued after the gallery.) 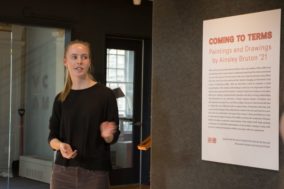 VCAM Postbac Courtney Carter ’17 introduces student artist Ainsley Bruton ’21 during the opening reception and artist talk of the Coming to Terms: Paintings and Drawings by Ainsley Bruton ’21 on the Main Exhibition Wall in the VCAM. Photo by Claire Blood-Cheney’21 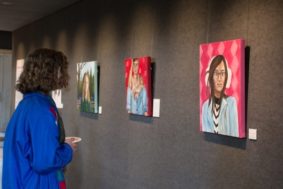 Attendees gather at the Main Exhibition Wall in the VCAM during the opening reception and artist talk for the Coming to Terms: Paintings and Drawings by Ainsley Bruton ’21. Photo by Claire Blood-Cheney’21

For help getting the project off of the ground, Bruton applied through the John B. Hurford ’60 Center for Arts and Humanities’ (HCAH) Student Arts Fund, which provides material support for creative projects outside of the curriculum. This got her in conversation with HCAH staff, including last year’s post-baccalaureate fellow Kelly Jung ’17, which led to plans to exhibit the portraits in VCAM through Nov. 9. Though Bruton is interested in exploring a more immersive project in one of VCAM’s Create Space rooms, she elected to apply for use of the Exhibition Wall for Coming to Terms in order to foster a more open gallery feel for the display.

“I’m very excited just to be able to share it with everyone,” said Bruton. “Someone was asking me if it felt different to see it up on the wall, and it definitely does. When they were in my room, I was working on them and I had been looking at them for hours and hours, so I felt like I knew them really well. Putting them up removes a little bit of that. I can step back and see them… slightly more objectively.”

Though this was Bruton’s first experience displaying her art at Haverford, she does not think it will be her last. After three years of painting classes in high school, and a pre-college program at the Kansas City Art Institute, what began as an effort to push herself artistically has provided an opportunity to examine herself not just as an artist, but also as an individual. To that end, the seventh student featured in the exhibition was none other than Bruton herself.

“I was unsure whether I wanted to do a self-portrait,” she said. “I did it last, and I completed it this year. I chose to do it because I felt that, although in the project I tried to convey other people’s identities, it was really about me trying to understand myself and the changes I was going through. It felt like I needed to include it and frame this all as a way of trying to look at myself and understand myself better.”