Compressing a decade into the span of a single day may sound like an impossible task, but the students and staff of Haverford’s Department of Classics have never been ones to back down from a challenge. On Wednesday, October 3, professors Bret Mulligan, Matthew Farmer, Hannah Silverblank, and Deborah Roberts kicked off the 12th annual Classics Marathon (punnily nicknamed the “Homerathon”) with a brief introduction to the selected text: Emily Wilson’s translation of the Odyssey, which has been lauded for the simplicity and beauty of its language since it was published in November 2017. (It is also the first English-language translation of Homer’s epic poem by a woman.)

First transcribed some three thousand years prior, the Odyssey covers the ten years in the life of the Greek hero Odysseus after the end of the Trojan War. In Wilson’s translation, it runs 402 pages, 24 chapters, and 12,110 lines and takes—as the classics department soon discovered—the better part of a day to read in full.

“We finished just a few minutes before 8 p.m., [having started at 9:30 a.m.],” Mulligan, who was responsible for organizing the event, reports. “A long but wonderful day!”

Wilson, a professor of classics at the University of Pennsylvania, even stopped by for an hour in the afternoon to listen in and talk with the gathered attendees.

“Since she’s [nearby], we were able to have her come talk to a group of students and faculty during our lunch break about the process of the translation,” Farmer explains. “She spoke on the one hand about… being a model for young women in the field and raising interesting questions about why the field of classics has been so male-dominated for so long, but she also addressed her ambivalence about the way her gender has come to frame so much of the publicity and reaction to the book. Beyond simply being a good translation, then, it’s also a significant moment for the field and for its place in broader society, and Professor Wilson is a wonderfully thoughtful scholar in confronting some of the questions and issues her work has raised.”

This was not the first time Mulligan and Farmer had recounted Odysseus’s adventures—among them, an encounter with a cyclops, an attempted seduction by Sirens, and a seance—to an audience before. In fact, this is the second time the Odyssey has been the subject of a Haverford Classics Marathon. Held all the way back in 2006 (which was, incidentally, only two years before now-Visiting Professor Hannah Silverblank would matriculate here), the inaugural marathon, which was billed as an opener for a conference on Homer that had been organized by Professor Deborah Roberts and where multiple translations of the Odyssey were read, was never intended to be anything more than a one-off event. Its sleeper-hit success, however, inspired Roberts, Mulligan, and their colleagues to make it a regular tradition. In the intervening 12 years, they’ve worked their way through a small portion of the vast Greco-Roman library, covering everything from Virgil’s Aeneid and Ovid’s Metamorphoses to Apeleius’ The Golden Ass and Homer’s Iliad—and they have no intention of stopping anytime soon.

“I think the event is valuable in a number of ways,” Farmer says. “For one, the significance of the translation itself gives us a chance to think publicly about the place of ancient literature in contemporary society. It’s also in a sense a kind of cooperative piece of performance art: it’s physically exhausting to read over 12,000 lines of poetry over the course of an entire day. It could never be done without the eagerness of students to volunteer and participate. And so it becomes a collective or communal achievement, performed live for an audience.”

Mulligan, for his part, emphasizes the orative nature of the marathon. Reading aloud, he believes, is necessary to replicate, even in part, the experience of ancient audiences.

“These poems were originally created to be performed and heard,” he says. “The marathon helps us connect to that millennia-old tradition of listening to epic. For students reading the story in a class, they have the opportunity to experience it in a new way. For others in the community, it’s a chance for a random encounter with a compelling and challenging work of art.” 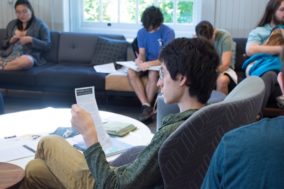 Every year students and faculty gather and read a Classical text from start to finish. This year, the chosen text was the Odyssey translated by emily Wilson. 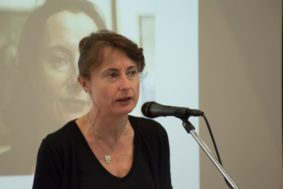 Emily Wilson talks about her translation and what makes it different from the other translations of the Odyssey. Wilson is the first woman to translate the Odyssey in its entirety and does so in iambic pentameter.