Created for the express purpose of supporting student innovative and entrepreneurial endeavors, the Haverford Innovations Program (HIP) has seen an extraordinary amount of success in the 16 months since its inception. Events it has sponsored have appealed across the Tri-Co; its summer incubator program saw small business Beyond the Bell Tours and resource-sharing platform Dibs through their early developmental stages; its student alumni include rising stars in the Philadelphia startup scene and five-digit-grant awardees. But Program Manager Shayna Nickel wasn’t content to let the program rest on its laurels. In collaboration with Swarthmore and Bryn Mawr Colleges and Villanova University, she channeled her organizational zeal into designing an event that gave center stage to the learned experiences of women who have succeeded in entrepreneurial spaces.

“Having the opportunity to talk to founders allows us to learn from someone else’s successes and failures,” Nickel says of her decision to hold an event devoted to women entrepreneurs. “Having a women-centric event not only provides that opportunity but is also inspirational and motivational for those looking for role models and a path forward with their own ideas.”

Held on Thursday, September 27, the inaugural Women in Entrepreneurship panel began with a brief Q&A session, followed in quick succession by dinner, dessert, and a screening of the documentary She Started It,  which follows several women in tech as they navigate the minefield of venture capital accruement. Featured speakers included Prianka Ball BMC ’17, co-founder of digital platform YOUNIFI; Barbara Bigford, founder of manufacturing company Seabreeze Products, Inc.; and Dorrit Lowsen ’97, co-founder and current COO of gender-lens investment firm Change Finance, Inc. Rebecca Fisher ’18, whose Beyond the Bell Tours was a part of last summer’s inaugural HIP Incubator, moderated.

“When, as a female entrepreneur, you go to events like these, events that are focused on entrepreneurship and building connections,” says Ball, “most of the time [you’re] going to be [surrounded by] men. You are not being represented at all, so I really feel that it is good to have spaces like this, where you get to meet other female entrepreneurs. I’ve had experiences where I felt like certain people in the room weren’t listening to me properly because I’m a woman, and so I’d have to go through my other co-founders, who were men, and say, ‘This person is not working with me, it seems like they are not listening to me because I’m a woman,’ and my co-founders would tell the person the same thing I’d said to the person, and the person would listen to them. There have definitely been times when I felt that happen.”

“The reality is that it’s hard to be a female entrepreneur,” adds Lowsen.“There’s much less funding available. It’s harder to get people to take you seriously, even people who believe that they’re gender-agnostic or really interested in investing in women…. And that’s true of men and women, because women have come up through the same corporate and cultural systems that men have come up through, and so women have also internalized at some level the concepts of traditional gender roles.”

Bigford, too, is no stranger to sexism in the corporate arena. As a newly-fledged businesswoman back in the early aughts, she was swindled out of nearly $50,000 by a crooked distributor.

“It was more than that he just took advantage of me because I was not a vendor already in his system,” she says. “He thought I wouldn’t fight back because I was a woman.”

Well, was he in for a surprise: Bigford sprang a court order on him right in the middle of a pitch meeting.

“When we found out that he was coming back to the West Coast to [negotiate with] ACME Markets, I got a constable to serve him his papers in front of all his peers,” she says, “and I found out from the constable who came back that he was livid. He was like, ‘How could you sue me?’ I said, ‘Well, you stole from a new startup, and these are your papers, and I’ll see you in court.’”

Listening to the panelists speak, Pelagia Majoni ’22, an aspiring entrepreneur, was reminded of just how intact the glass ceiling still is.

“As women we are [still underrepresented] in entrepreneurship,” she says. “These events, where the guests are also women, give us someone like us to look up to.” 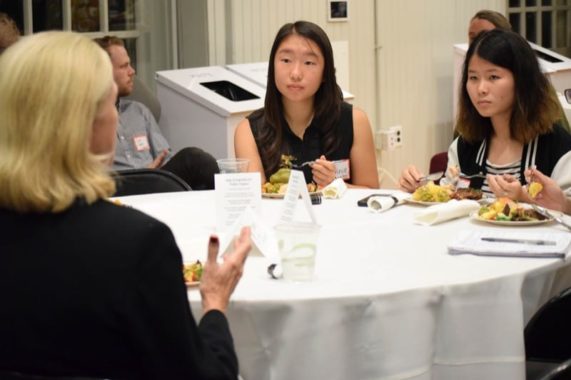 Barbara Bigford talks with a table of students. Photo by Sarah Jennings ’21