“The vote is the most powerful nonviolent tool we have… it is almost sacred,” said President Kim Benston, quoting civil rights activist and Representative John Lewis, in his opening address to the members of the Haverford community gathered in Marshall Auditorium for the “Midterms 2018: What’s at Stake?” panel.

Lewis’s quote echoed the rest of Benston’s introduction and the sentiment underlying responses given by the panelists throughout the conversation, which focused on the value of the vote in this November’s elections and the importance of exercising one’s civic duty to create the change one wishes to see in our politics and our country.

“In our current media environment, there’s often a premium placed on the ‘hot take’ or sound bite, and there aren’t many venues for sustained, thoughtful dialogue about our politics,” said Associate Professor of Political Science and panel moderator Zach Oberfield. “I think this panel fostered such a conversation and, in doing so, provided attendees with a deeper appreciation of the issues and problems at stake in this election.”

Oberfield’s proposition that political affairs have become a partisan battle royale was reflected in statements from multiple panelists, regardless of their political leanings and party affiliations.

“There’s a real emotional element to politics,” said Bunkeddeko in response to a question about the role of the Kavanaugh hearings in mobilizing conservative voters.

Isenstadt agreed, saying that “more and more people have come to see politics as a form of entertainment.”

Williams, who signed copies of his latest book (What The Hell Do You Have to Lose: Trump’s War on Civil Rights) after the panel, commented that the midterm elections are, in many ways, a sort of “referendum on Donald Trump,” and subsequently an opportunity for moral and social obligations and expectations to divide our bipartisan system further.

All four panelists expressed concern with the deeply ingrained partisan lines that can prevent open-minded conversations and approaches to good governance. In the most Haverfordian sense, the alumni approached questions with thoughtful reflection without compromising their passions and principles. 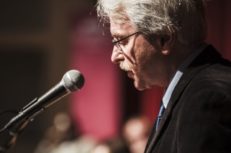 President Kim Benston makes opening remarks at the start of the Midterms 2018: What’s at Stake? panel in Marshal Auditorium. The panel conversation is sponsored by the Multicultural Alumni Action Group (MAAG) and the student organization HaverfordVotes. Photo by Holden Blanco ’17

Juan Williams ’76 signs his book ‘What The Hell Do You Have To Lose?’ in Marshall Lobby after the conclusion of the Midterms 2018: What’s at Stake? panel. Photo by Holden Blanco ’17

Watch the panel in its entirety: