The misty weather outside couldn’t quell spirits as Haverford students gathered en masse on the bleachers of the Calvin Gooding ’84 Arena of the Douglas B. Gardner ’83 Integrated Athletic Center to reach quorum (the percentage of the student population that must be present to vote on resolutions, or proposed policies and changes) in record time.

At last spring’s Special Plenary, students voted overwhelmingly to increase quorum from 50 percent to 66 percent of the student body in an attempt to increase community engagement with the process. Even accounting for this increase, quorum was still reached in 24 minutes, causing the room to buzz with enthusiasm and many voices to hear and learn from over noshing on chicken tenders.

A bit unusually, there were no resolutions presented this year, so the Students’ Council co-presidents opted instead to engage with the community through a question-and-answer period, where students posed queries on topics ranging from Honor Council trial procedures to the role of the Joint Student Administrative Alcohol Policy Panel co-heads to the election process for student government positions following a turbulent period of re-runs earlier in the semester.

Plenary is an essential expression of Haverford’s commitment to student self-governance, and is a space organized by Students’ Council for students to gather and vote on changes to community guidelines that reflect the values of the student body at a given time. A tradition that spans decades, votes are counted by a show of raised hands, with a majority of votes needed to pass a proposed resolution and two-thirds of votes needed to ratify the Alcohol Policy in the fall and the Honor Code in the spring. 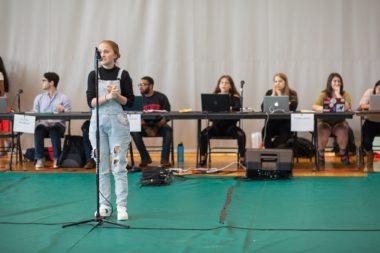 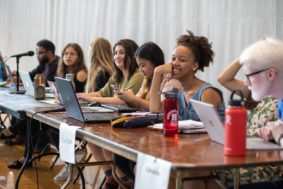 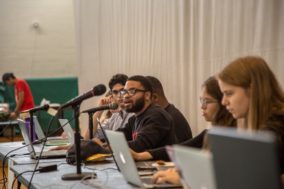