Since its opening at the beginning of the academic year, the VCAM’s Maker Arts Space has served as a home for Haverford students who want to collaborate and share their artistic creativity. The exhibition How to Build a Guitar, which was on display from March 26 through 30 around the corner in one of VCAM’s Create Spaces, served as the most recent the illustration of the Maker Arts Space’s potential.

The exhibit documented the construction of a guitar by Maker Arts Space Assistant Micah Maben ‘21, who relied on the space’s various tools–3-D printers, CNC routers, laser cutters–to build a working, playable instrument from scratch. The first-year student, who had some prior experience with sculpting and woodworking, had been attracted to the creative potential of the VCAM since first touring Haverford and was excited to put it to work. Maben will be building upon and sharing those guitar-making skills in a guitar-wiring Workshop held in the Maker Space– where else?–on April 24 at 4:30 p.m.

“I really love guitars and the process of building things,” said Maben. “I think one of the advantages of having a space like this on campus is that there’s a real community behind anything you do in this space.”

Maben worked with VCAM Media Consultant Jessica Lopez ‘21, who helps publicize what the technicians create, to discuss the construction process and put the pictures on display in the gallery space. “Before documentation and the making of the guitar, we planned out all the photos so we would have an outline for what we wanted the show to really convey,” she said. Lopez is excited to use the hands-on skills she learned in her job in the Maker Space during future exhibits in the VCAM.

The Maker Space, which offers appointments and weekly walk-in hours, provides digital fabrication and traditional craft opportunities for students, staff, and faculty. Kent Watson, its coordinator and technician, leads introductory and advanced workshops on the equipment that are open to anybody on campus. Some of the workshops he’s led so far include vinyl cutting, 3-D scanning, sculpting, app-building, rubber-band-car making, and even one in which students learned how 3-D print their own designs for a fork.

“I loved the exhibit by Jessica and Micah,” he said. “It is so exciting for me to see students utilizing the space and collaborating on such a beautiful project. The finished work spoke for itself. It told the story of the process of making. Often times the process gets lost and we focus on the end result. I was glad the exhibit showed off all the effort that went into that guitar.”

Before the semester comes to an end the Maker Arts Space will be offering two more workshops. The first is Maben’s guitar-wiring workshop, which will include overview of guitar maintenance, wiring, and soldering. Next there will be a mold-making workshop at 4:15 p.m. on May 3, in which students, using small found or 3D-printed objects, will replicate these items with silicone molds. 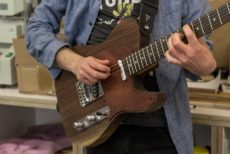 First-year Micah Maben shows off a guitar they made in the VCAM Maker Space. Photo by Abigail Harrison ’19 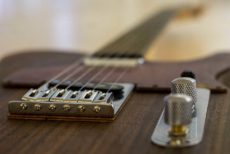 A close-up of Micah Maben’s guitar. Photo by Abigail Harrison ’19 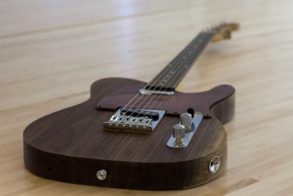 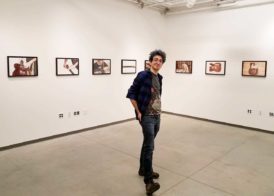 Micah Maben ’21 in the Create Space exhibition documenting their guitar-making experience in the Maker Space. Photo by Abigail Harrison ’19