What: Men’s Rugby has been a part of sporting life at Haverford College since the 19th century and an official club sport since the 1970s. The current team is always looking for new players and welcomes all experience levels and body types. Notably, Men’s Rugby went undefeated during their past fall season, winning their league championship against Moravian College. Their championship match was both the year’s most “physically difficult test [and] the perfect culmination to our season,” said Team President Joseph Alejandro ‘19. “We were out-sized during the match, but as we had done all season we were able to pull together a win relying on our craftiness and conditioning.”

Who: The club’s three team captains are Michael Bueno ’18, Ricky Sanchez ’18, and Matt Jablonski ’19. Joseph Alejandro ’19 serves as the team president, while Adetomiwa “Tomi” Famodu ’18 manage’s the team’s finances as treasurer. There is also a Bi-Co Women’s Rugby Team, which practices at Bryn Mawr.

When: Men’s Rugby holds practice three times a week on Tuesdays, Thursdays, and Fridays in both the fall and spring. (The spring season started the week of March 12 and will continue until the last week of classes.) The team holds their formal season in the fall, participating in the the Mid-Atlantic Rugby Conference (MARC) Silver Tier, where they play against teams like Temple University, Rowan University, and Ursinus College. During the spring season, the team plays shorter, friendly matches against other nearby colleges and universities. This spring, they have matches scheduled against Bloomsburg University and Gettysburg College.

Did You Know? During the spring season, the team also holds a match against the Dirty Old Newts, a rugby team made up of Haverford alumni who return to play against the current team over Haverfest weekend.

Get Involved: Anyone interested should feel free to reach out to the team’s captains or president for more information. Stopping by one of their practices, held on Upper Featherbed field, is also a great way to get started. 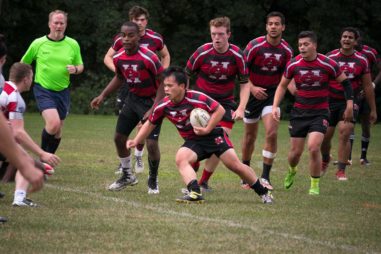 Haverford Men’s Rugby scoring a goal despite the defense by Temple. (9/30/17)

Haverford Rugby player making eye contact with a Temple defender as he goes for the goal. (9/30/17) 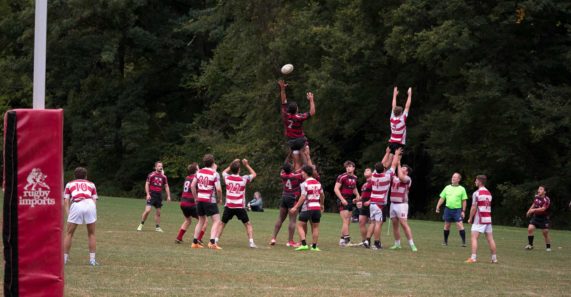