The presentation lounge of the Visual Arts, Culture, and Media facility (VCAM) swelled with classicists during ORALiTea XIII, the classics department’s annual spring information session and oral recitation night. More than 40 students and faculty performed 17 selections from Latin and Greek literature that included poems, plays, and songs. The event, as always, gave students the chance to learn about programs in classics and upcoming courses, and presented an audible engagement with texts that usually reside on paper.

“Literature in ancient Greece and Rome was almost always a social event, far more likely to be performed than read in solitude,” said Associate Professor of Classics Bret Mulligan. “Because ORALiTea usually features a mix of the canonical works and less familiar texts, it both highlights the fantastic literature that lies at the heart of our discipline and also the weird, wild, and wacky texts that continue to surprise us.”

Coupled with the fall semester’s Marathon event, which annually involves a slew of community members in either a 12-hour public reading or a shorter staged play, ORALiTea offers students, regardless of their background in classics, a venue to engage with ancient literature in new and creative ways. This year, some students chose pieces for solo recitation and others formed groups as large as 10 performers. Some chose to draw upon props (like the stuffed animal sacrificed in Homer’s Odyssey), and some even memorized entire poems.

“I feel that recitation is extremely useful in developing a sense of the language and in appreciating the sound of poetry,” said Yuchao Wang ’20, a cognitive science major hoping to minor in classics. In both “The Roman Revolutions” and “The Golden Age of Athens,” two introductory-level classes with Mulligan, Wang participated in debate as ancient Roman and Greek characters. Following some experience in class acting out a classical persona, he decided to recite in Latin selections from Horace’s Epodes 2 at this year’s ORALiTea.

Though ORALiTea has been a staple of the classics department since 2006, this was its first time in the VCAM. While in years past, the excited crowd from Bryn Mawr and Haverford filled classrooms to capacity, the open space in the VCAM’s presentation lounge raised the event’s capacity.

“The event gets bigger almost every year and this was our largest crowd yet,” said Mulligan. “In addition to the performers, the audience included faculty, students supporting their friends, members of the local community, prospective students, and even an alumna who performed at the first ORALiTea.”

After another successful ORALiTea, the classics department is looking forward to a 12-hour Marathon reading next fall of Homer’s Odyssey, which was last recited in the inaugural Marathon reading 12 years ago. 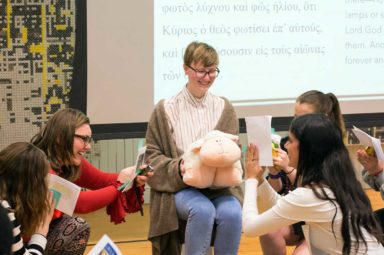 For the first performance, students and falculty re-enacted a passage from Homer’s Odyssey (Book 11). 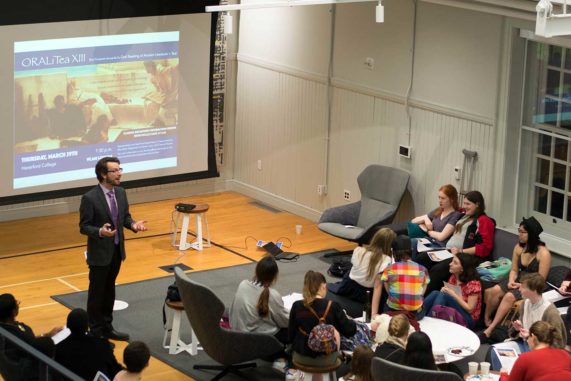 Students prepare to perform their seletced Greek and/or Latin works.