Fords from yesterday and today gathered on campus for the Fourth Annual Public Policy Forum to discuss the challenging work of seeking peace, social justice, and global citizenship via policy solutions in their home communities.

Eric Hartman, executive director of the Center for Peace and Global Citizenship (CPGC), one of the event’s hosts, said that the underlying theme of all Haverford’s public policy forums is education for ethical action.

“Public policy is the location where ideals are implemented,” said Hartman. “The CPGC’s dedication to peace, social justice, and global citizenship is not merely theoretical. We work with alumni and others who are doing the hard work of pressing for justice in courtrooms, legislatures, executive offices, and board rooms. These individuals don’t always agree on how ideals will be achieved, but they all play instrumental roles in the work of justice. This year’s panelists advance migrant rights, a more just justice system in the U.S., environmental preservation and sustainability, public health, international development, and equitable education.”

The day-long event, sponsored by the CPGC, the Center for Career and Professional Advising, the Koshland Integrated Natural Sciences Center, and a group of interested faculty, featured six panels of alumni speakers and faculty moderators grouped by area of policy expertise: health, criminal justice, environmental, immigration, public education, and international development. It also included opportunities for current students to network with the professionals and present their own policy-related research, and spotlighted the work of Executive Director of the Center for Constitutional Rights (and former ACLU lawyer) Vince Warren ’86 via a keynote conversation with Politico White House reporter Annie Karni ’04.

Political science major Orli Siegel BMC ’18, who presented her own research on race and drug policy during the poster session, attended eager to learn more about criminal justice policy because of how it relates to her thesis.

“I really enjoyed the Criminal Justice Policy and Incarceration panel and hearing Haverford alumni talk about the work they do and how they got there,” she said.

Those alumni included Emily L. Bock ’11 of the Defender Association of Philadelphia; Erin Kerrison ’07, an assistant professor of social welfare at U.C. Berkeley; and Sarah Morris ’05, co-founder of Youth Arts and Self-Empowerment Project, which provides space for incarcerated young people to express themselves creatively and to develop as leaders both within and beyond the prison walls. The three women discussed their work and how progress can be made by reforming criminal justice policy.

A shared conclusion across the panels: multiple perspectives are needed when crafting policy solutions to large-scale problems.

“I was excited to hear from different alumni about the environmental relevance of their work including transportation, law, and sustainable energy,” said Associate Professor of Chemistry and Environmental Studies Helen White, who moderated a panel on environmental policy and who hoped that attendees left her panel understanding “that informed policy decisions should require a conversation from a diverse range of voices, and that everyone’s perspective should be carefully considered.”

In their shared keynote, both Warren (the civil rights attorney who now runs an organization dedicated to advancing and protecting the rights guaranteed by the United States Constitution and the Universal Declaration of Human Rights) and Karni (who followed Hillary Clinton on the 2016 presidential trail and now covers the Trump White House) discussed a wide range of topics from how their time at Haverford shaped their views to current events, President Trump, culture shifts, and how to make the world a better place.

“[Haverford] was a place where I learned a lot things,” Warren told Karni. “I became a feminist here. I began to learn what it was like to be black in America without my parents’ support or my support system here. I learned to think critically here. I learned how to have really vicious and loving debates at the same time here. It’s been a tremendous place for me.”

In his long and storied career, Warren (who said he’d wanted to be a civil rights lawyer­­–or a professional bowler–since he was seven) used those debate skills to argue cases on affirmative action, racial profiling, criminal justice reform, human rights abuses, expansion of presidential power, and much more. He was even involved in monitoring South Africa’s historic Truth and Reconciliation Commission hearings. Attendees also learned about filing the first habeas corpus challenges to the Bush administration’s Guantanamo detention policy 30 days after the first prisoners were moved there, and the lessons he learned about the justice system from his early-career work as a paralegal on the infamous Central Park Five case.

After Donald Trump won the 2016 presidential election, Warren said that the Center for Constitutional Rights had a meeting to discuss how to tune out “the noise” of flashy tweetstorms and focus on how they can best serve the most vulnerable communities who could be hurt by the administration’s policies.

“Our client is social change,” he said. “We work with grassroots organizations whose mission it is to create social change. Therefore, our litigation is about removing the legal obstacles that they’ve outlined as their path to social change. We spend more time in church basements talking to people than we spend in the Supreme Court. We spend more time pulling together coalitions than we spend on congressional delegations. And that makes the Center for Constitutional Rights a bit of an outlier in the social justice legal field because we’re the people that say, ‘Yeah, that’s the best policy compromise we can come up with in this Congress, but that’s actually nowhere near what needs be happening.'” (Continued after the gallery.)

The panel on environmental policy. Photo by Claire Chenyu Wang ’20.

The panel on environmental policy. Photo by Claire Chenyu Wang ’20. 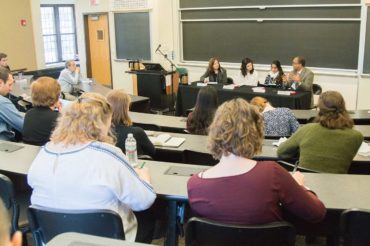 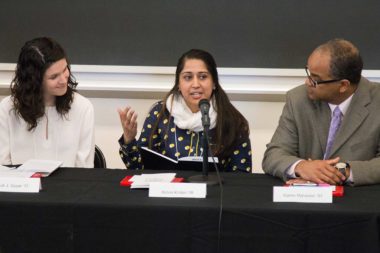 Students shared their own policy-related work during a poster session. Photo by Wanyi Yang ’20.

Students got to explore each other’s policy-related work during a poster session. Photo by Wanyi Yang ’20. 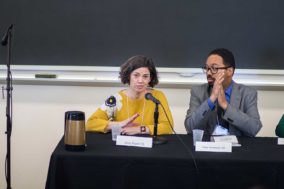 Jenny Bogoni ’88, executive director of the Read by 4th Campaign of the Free Library of Philadelphia Foundation on the public education panel. Photo by Wanyi Yang ’20. 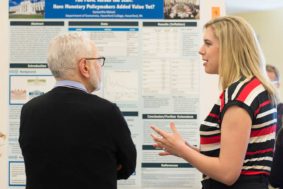 Students present their own work at the poster session. Photo by Claire Blood-Cheney ’20. 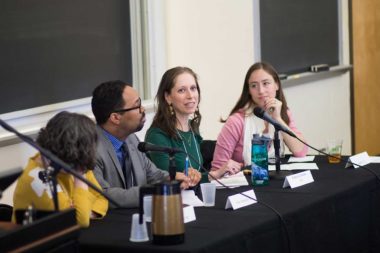 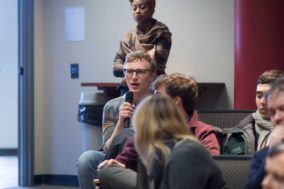 Lev Greenstein ’20 asks a question during the keynote conversation. Photo by Wanyi Yang ’20. 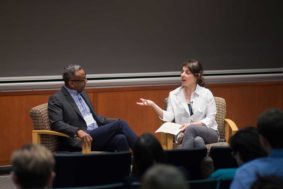 Students at the Public Policy Forum were encouraged to both learn from the professional examples of Warren and the 19 other alums at the forum and teach them about their own policy-related work. Fourteen current Bi-Co students presented posters related to their current coursework or their theses. Hailing from departments as diverse as political science, history of art, economics, and beyond, they presented work on topics from affordable housing to public art to retirement communities.

“My poster was on my senior thesis topic, which is about why some drug crises are treated as criminal-justice issues while others are treated as public-health issues in the context of the 1980’s crack crisis and the ongoing opioid crisis,” said Siegel, the BMC poli sci major. “I argue that race is a major reason why the opioid crisis warrants a less punitive approach.”

History of Art major Esme Trontz ’18 presented a poster titled “Why Monuments Don’t Work and What We Should Do About Them,” which was about the conversation around the removal of controversial Civil War monuments in the South. “I argued that we should rethink how monuments really work in public space,” she said. “Monuments themselves do not maintain memory, people do. The context, therefore, not the monument itself, is more important in determining the meaning of it.”

Ultimately, the Public Policy Forum was a great opportunity for students from different academic backgrounds to share their interest  in creating a more just world and to use their expertise in service of that goal while learning from their Ford predecessors.

“Social and environmental challenges refuse to be disciplinarily bounded,” said Hartman. “This situation makes Fords ideal candidates for working on such challenges precisely because Haverford graduates are rigorously prepared for learning, communicating, and taking action across a variety of fields and modes of inquiry.”