During most hours of the day, the dish collection system at the Dining Center (DC) rotates between the east dining room and the dish room. Until this month, white walls surrounded the dish repository area, fronted by recycling, trash, and composting bins. Shortly before break, however, the Committee for Environmental Responsibility (CER) partnered with student art collective James House to paint a mural around the dish room window that features reminders about composting amidst a colorful scene charting the food cycle from production to consumption and composting.

During three after-hours sessions prior to spring break, student volunteers took up paint brushes and made a white wall burst with yellows, browns, blues, and more. Speech bubbles rose from cartoon squirrels reminding students why they should compost and which items should go in which bins.

Since January 2014, the Dining Center has been composting uneaten food through an industrial compost-collection service called Kitchen Harvest, but recently, DC patrons have contaminated compost bins with non-compostables. The mural project, coordinated with the help of the Dining Center, Facilities, and the Arboretum, seeks to clarify the composting process, aiding systems already in place on campus to put food to better use.

“When talking with people at the Dining Center, I found that students wanted to compost, but didn’t know how to,” said Nicky Rhodes ’19. “Hopefully this mural will shed some light on the specifics.”

Owen Deitcher ’20, head of the CER Art Work Group, coordinated with other campus groups, gathered materials, and organized volunteers, while Rhodes, also a CER member, and Sabrina Emms ’18 spearheaded the design. During the three-phase process of priming the wall, sketching the outline, and painting the mural, student participants added their own artistic interpretation to Rhodes’ original vision. The end result is a cheery and attention-grabbing addition to a highly visible communal space that asks people to think twice before dumping leftovers or dropping off plates.

“I believe that public art is the most accessible form to communicate a misunderstood concept like composting and make environmentalism a part of our daily routine,” said Deitcher. “The mural serves to draw people into the colorful array of natural elements and educates people through their curiosity.”

With variable artistic experience, multiple students dropped by for a chance to make their mark on what will now be a visual experience in most students’ daily lives.

“I hadn’t been involved with CER before, but I’ve enjoyed painting murals in the past so I thought it’d be a good way to get involved with art and environmentalism on campus,” said Sarah Jesup ’19, a member of the James House board.

Nearby, Philadelphia boasts one of the most robust mural cultures in the country, and the partnership between CER and James House hopes to encourage a similar trend on campus. The CER Art Work Group is hoping to plan another mural in the near future, and, though its location and content is still undecided, its mission will also be to use art to make environmentalism more visible on campus.

“Exemplary Haverford teamwork was on display in the making of this mural,” said long-time CER member Russell Nicholson ’18. “Nicky Rhodes and Owen Deitcher were an inspiring environmental art duo who galvanized the right people at the right time to bring about a much-needed symbol of sustainability. These Fords, and all involved in the mural, fuel my hope… that the light of a green revolution will be carried on and passed again until our campus models the needed future.” 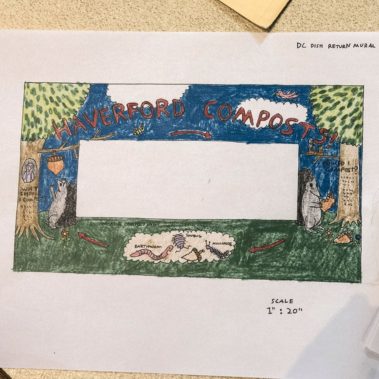 A sketch of the mural 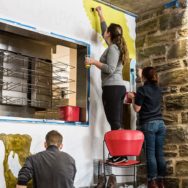 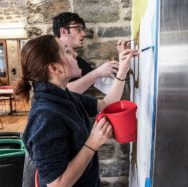 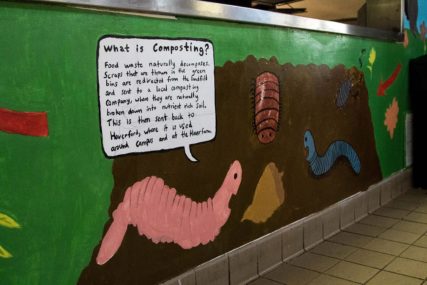 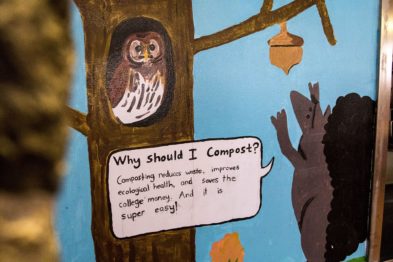 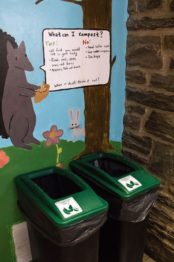