David Kim, longtime concertmaster of the Philadelphia Orchestra, is used to playing for packed crowds around the world, but on Jan. 31, he was focused on just four people: Georgia Meyer ’19, Helen Jung ’18, Meredith Levin ’21, and Jake Bernstein ’19, all Haverford student violinists. Brought to campus by the Bi-Co Department of Music, Kim offered a masterclass, which was free and open to the public, inside cozy, MacCrate Recital Hall at which each student got the chance to perform a piece for him and then receive tailored, one-on-one critique.

It was hard to believe the intimacy of the session, which felt more like an orchestra concert than a recital thanks to the individuality, and was attended by a handful of members from the Haverford community eager to share in the unique experience.

One by one, the student-violinists performed prepared pieces and received demonstrations related to their renditions by Kim, who was supportive, encouraging, entertaining, and eager to involve audience members. Following his commentary on subjects such as tone, color, and composure, students worked diligently to perfect each passage.

When Jung, who is co-concertmistress of the Bi-Co Orchestra, stepped to the stage and confidently performed Cesar Franck’s “Sonata in A Major”, she received both applause from the audience and a thoughtful assessment from Kim. Each student received similar treatment, with Bernstein playing “Praeludium and Allegro” by Fritz Kreisler, Meyer playing “Meditation” from Thais by Jules Massenet, and Levin—who is only in her second semester at Haverford—playing the first movement of Vivaldi’s “Concerto in G major.”

“He helped me achieve a large range of textures and colors in my performance of the Franck sonata, as well as in my violin playing in general,” said Jung, who found the masterclass with Kim far less intimidating than expected. “It was great to see people from the Haverford neighborhood attend the event. I’m sure that they also enjoyed and learned a lot from the masterclass.” 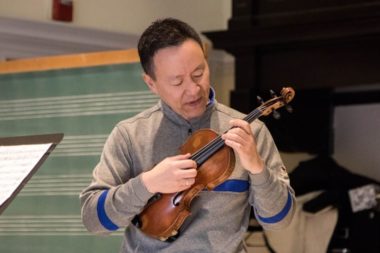 “It was a really incredible experience having the opportunity to work with David Kim,” said Bernstein. “His advice pushed me to be thoughtful and present in my playing.”

Kim, for his part, also enjoyed his time with the students, and said that he found the experience of working with liberal arts majors from across a variety of fields “tremendously stimulating and inspiring.”

Kim had performed at the College earlier, on Nov. 14, and this most recent masterclass was an extension of that performance. The Department of Music spends a lot of time seeking out working artists “who not only perform for students, but work with them,” said Nancy Merriam, the College’s music performance coordinator who was responsible for setting up the masterclass.

The Department of Music’s next event is the Chamber Orchestra’s First Editions-Spring Concert. Free and open to the public, the concert will take place in Roberts Hall, Marshall Auditorium on Saturday, Feb. 17.