Haverford students strive to change the world, but last weekend, they settled for simply changing the availability of the Blue Bus schedule, creating a new course database, and preventing campus food waste at the 2018 Tri-Co Hackathon.

A prelude to the Tri-Co Startup Weekend, Tri-Co Hackathon, which first started in 2014, has been growing greatly over the past four years and was overseen by the Haverford Innovation Program (HIP), a new program this year run out of the Visual Culture, Arts, and Media facility, with the help of Swarthmore Librarian for Digital Initiatives and Scholarship Nabil Kashyap and Bryn Mawr CLIR Humanities and Digital Scholarship Postdoctoral Fellow Jessica Linker.

The weekend-long event kicked off with different workshops at which students from Haverford, Bryn Mawr, and Swarthmore with varying computer programming experience learned skills from user interface design to geographic information systems (GIS). The workshops were led by a mix of Haverford students and Tri-Co faculty and staff. Then, after dinner and a talk by Vicky Tam, senior GIS analyst with the Healthcare Analytics Unit at PolicyLab and the Center for Pediatric Clinical Effectiveness at Children’s Hospital of Philadelphia, teams formed to brainstorm and design apps of their own.

“The presentations were a real delight,” said Shayna Nickel, the VCAM Innovation Program Manager. “It’s always so impressive to see nascent ideas transformed into working concepts—especially in such a short period of time.”

One such concept, created by computer science and linguistics double majors Conor Stuart Roe ’20, Emily Lin ‘20, and Ian Fisher ‘19, was an app called Twitter Twin. It allows users to type in a phrase or Twitter username and then shows how similar the user is to five preselected celebrities. (An example is the phrase “Good Morning, Space,” which is a 76.6% match with Elon Musk.) It was named runner-up in the category of Best Overall Hack.

“We wanted it to be fun, entertaining, and different,” said Lin of their project. “We knew people would be working on the Blue Bus and course scheduling, which were both our initial brainstorm ideas. We wanted something interactive and usable. [And I think that our project ] definitely does serve an entertainment purpose.”

“I worked on both the front-end and the back-end of the site,” said Fisher. “The front-end is the design, the user experience, what does it look like, how does it interact. Emily and I worked on that a lot. I also worked on the back-end. That was the server code that linked the website that you visit with Conor’s natural-language processing code.” (Continued after the gallery.) 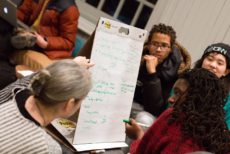 Brainstorming ideas at the Tri-Co Hackathon.

Brainstorming ideas at the Tri-Co Hackathon. 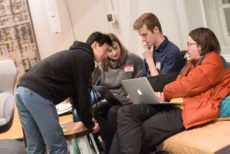 Students worked in teams to create and code new apps. 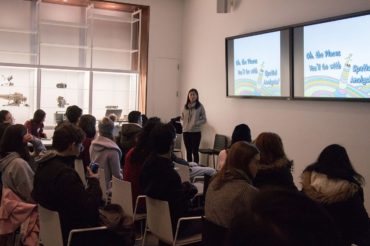 The Hackathon kicked off with a series of technical workshops, like this one on spatial analysis.

Practicing skills during a workshop.

HIP, which was created with donor support as part of new VCAM building, launched in the fall and has already had a huge presence on campus. Last semester, it ran a series of Design Thinking Workshops, and this month it is a sponsor of the Tri-Co Startup Weekend at Swarthmore and a series of guest speakers including Kathie Jordan ’94, head of the Coulter-Drexel Translational Research Partnership program, and Katrina Spade ’99, the founder & CEO of Recompose. The Hackathon fits into HIP’s mission of providing extra-curricular programs and workshops that are focused on human-centered design and problem solving, and developing innovation and entrepreneurial frameworks.

“Bringing this all together was a real Tri-Co effort,” said Nickel. “I am incredibly appreciative to all the students, faculty, and staff that put their time and energy into this event.”

The six projects developed during the Hackathon also included “Dibs,” a text-message service that can inform people on campus of leftover food to prevent food waste; “Athena,” a project to help with class scheduling; and a website that would help people learn about their local politicians.

The Best Overall Hack prize went to the Blue Bus App team, a team of Haverford students that made a simple countdown timer to the next Blue Bus departure for both Bryn Mawr and Haverford.

“We all noticed that when we want to use the Blue Bus, we have to look it up because the schedule is different every day of the week,” said computer science major Matthew Soulanille ‘19. ” We thought that is would be nice if there was a fast way to get that data. Looking at website takes a lot of time. So, we thought that an app that would just show you immediately when the next Blue Bus is would be helpful. My part of the project was grabbing the data from the Blue Bus website and parsing it into a format we could use, and then using that data to figure out what bus will be coming next based on what time it is.”

The team is still working on the Blue Bus App and plans to release the app sometime in the next two weeks after finishing up some final details and securing funding for an Apple-develop license.

Though many of the participants study computer science, the work they did at the Hackathon was related but markedly different from their coursework.

“A lot of what I was doing was far-removed from the computer science classes I’ve taken, but my academic experience definitely helped with my general ability to code and to find mistakes in my project,” said Soulanille, who was attending the Tri-Co Hackathon for the second time.

Even for those students with extensive technical skills, there were new ones to learn over the course of the weekend. Soulanille, for example, had never used the mobile application development software Phonegap before, and was blown away by how easy it made building apps for both Androids and iPhones. And for those who had previously found programming work to be solitary, the Hackathon gave them a space to practice collaborating.

“This has been a really good experience, working with other people,” said Soulanille. “I haven’t had a lot of practice with this skill and it’s great to have more experience with collaboration.”

And though the Tri-Co Hackathon just ended, students are already looking forward to the next one.

“I think there are many people who have good ideas, but don’t show up [at the Hackathon because] they think that this weekend isn’t for them because they don’t have the technical skills or background,” said Lin. ” I think it would be really cool if we could attract way more people from different academic backgrounds.”

“As I was leaving on Saturday night a student, a student asked if could have a hackathon twice a year.” Nickel said. “There’s always room for improvement, but hearing that made me feel the event had been a success.”