The Kosovo War of 1998–1999 displaced over a million Kosovar Albanians, an ethnic group that primarily resides in the eponymous territory in the Balkans. Dita Cavdarbasha ’19, who at the time of the conflict was two, was one of the many who left. Her new exhibition, letter to my serbian neighbor, on display in the Visual Culture, Arts, and Media facility (VCAM) marries her poetry to documentary film to interject her voice into the memory and imagery of the war.

Cavdarbasha and her older sister were born in Kosovo, and her parents had spent their whole lives there. When war broke out, the family emigrated to the Bronx, leaving Cavdarbasha with little memory of her birthplace. Her Kosovar and American influences spilled into her artistic endeavors as she took classes in creative writing and documentary film. This exhibition combines those two passions. It consists of three screens, each with a different work that captions a segment of video footage with Cavdarbasha’s poetry. Exploring the duality of her identity, one poem asks “how do I belong to something that doesn’t exist anymore?”

“That displacement has kind of influenced the way I feel in America as being too foreign for America, but then going to Kosovo, I don’t have formal education in Albanian, so I don’t really speak the language as well as maybe my parents would like me to, or maybe as well as I should,” said Cavdarbasha, an English major. “When I go to Kosovo I’m definitely too American for that as well. That kind of ‘in-between’ state constantly is something, as a writer, I’m drawn to a lot.”

Two of the videos, child of war and embodied, draw footage from The Valley, a documentary about the Drenica Valley in Kosovo, while the third, borrowing sugar, uses footage from a BBC report. child of war was inspired by a conversation Cavdarbasha had with her mother about the violence that caused her displacement. embodied tells the story of her grandfather, who believed that Serbians stole a kidney from him, even though he was born with only one. borrowing sugar presents Cavdarbasha’s poetry as faux-closed captioning to the BBC reporter’s words, aiming to insert a Kosovar Albanian voice into a video that lacks one.

The placement of Cavdarbasha’s poetry as text that unfolds through each video marries image and word as a catalyst for addressing diverse themes of loss, voice, God, land, and belonging.

The project received support from the Hurford Center for Arts and Humanities, whose post-baccalaureate fellow, Kelly Jung ’17, helped organize the exhibition and originally reached out to Cavdarbasha after encountering her poetry and documentary work. The exhibition marks Jung’s second time, following last semester’s Shine by Alliyah Allen ’18, displaying student work in the VCAM, and she has enjoyed elevating art on campus by acting as a liaison between her former classmates and the Hurford Center.

“[This exhibition] features not only her work, but her approach as a documentary maker,” said Jung. “So I was very intrigued by the piece… It was a project I saw immediately and was like ‘I think this should be an exhibit.’”

An opening reception last Friday gave Cavdarbasha the chance to present her work both to her peers and to her parents, whose conversations and experiences helped inform the art. As a maiden voyage for Cavdarbasha’s endeavor into mixing film and poetry, the project bodes well for her artistic future.

“Sharing my work publically is always a vulnerable experience since it’s usually pretty personal,” she said. “Nonetheless, it was an almost surreal experience seeing my work displayed in VCAM. From the wall text to the screens with my videos on them to seeing people listen with the headphones, it made me excited to move forward with my creating and sharing my work.” 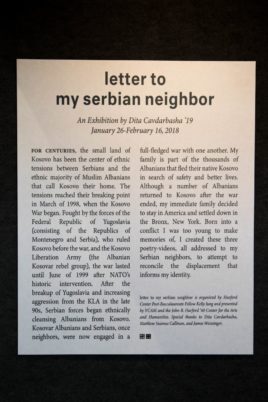 Sign at the entrace to the exhibit. Photo by Dex Coen Gilbert ’21. 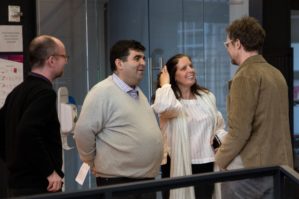 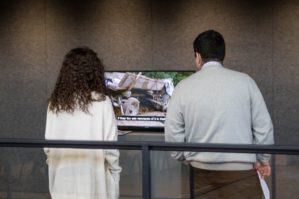 Two individuals looking at a piece in the exhibit. Photo by Dex Coen Gilbert ’21.