The long awaited Black Extra/ordinary Symposium, held October 6 and 7, invited scholars and artists from the greater Philadelphia area and members of the Haverford community to explore blackness in the realm of visual studies. Beginning with a performative keynote by Philly-based artist Jaamil Kosoko, the symposium devoted its second day to panel discussions on blackness in the realms of fashion, museums, and visual art. The event ultimately concluded with an artist and curator roundtable and an artist-led walk-through of Sadie Barnette’s Dear 1968…, which is up in the campus’ Cantor Fitzgerald Gallery through Oct. 13.

Knight confirmed that a large part of her inspiration for the symposium came from a desire to “[make it] clear to people in Philadelphia that this space is open to them.” Furthermore, it was her hope that because the Black Extra/ordinary Symposium focused on “black art and folks who are otherwise marginalized,” those core issues and ideas would remain central to the “exploration of what the visual is here at Haverford.” 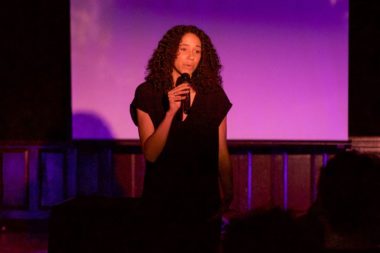 The audience for the keynote performance.

Scenes from the film “White State | Black Mind: The Making of #negrophobia” 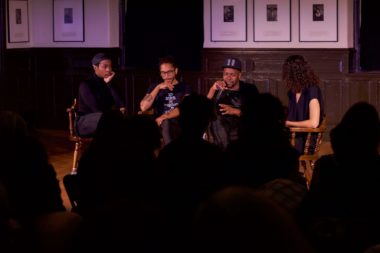 The exciting opening keynote embodied much of the symposium as a whole and was, therefore, a good introduction to the next day’s talks. It commenced with a preview screening Kosoko’s film White State | Black Mind: The Making of #negrophobia before audiences witnessed an excerpt from the artist’s newest performance piece, Séancers. In the performance Kosoko and his collaborators, IMMA and Jeremy Toussaint Baptiste, explored the possibility of “[realizing] oneself ontologically as a black body [within] the complexities of whiteness,” said Kosoko. The performative act explored the continuum of hashtag activism and its relationship to recent events.

Judging from the enchanted responses of the keynote audience, it seemed clear that Knight had been successful in showing students considering a visual studies minor just how rich and varied the field can be.

“Visual studies is meant to complement different kinds of study,” she said.“The idea is that students working in all disciplines can bring their particular expertise to visual studies.” Knight hopes, specifically, that Bi-Co students in the humanities, social sciences and natural sciences were all moved by the symposium and realize that they “can have an opportunity to make things” in tandem with the chance to be “in dialogue with other kinds of thinkers.”

The Black Extra/ordinary symposium was sponsored by the Interdisciplinary Minor in Visual Studies, VCAM, the John B. Hurford ’60 Center for the Arts and Humanities and its Tuttle Creative Residencies Program, in addition to the Cantor Fitzgerald Gallery.