Here’s what Whalen had to say about her class:

Water covers 71% of the Earth’s surface and constitutes the single largest repository of organisms on the planet, with virtually all phyla represented. The oceans and its inhabitants are valuable resources for humans. Arguably, humans have had a major impact on ocean ecosystems by directly or indirectly altering habitat and changing species composition. Understanding and quantifying human impacts is needed for the evaluation of tradeoffs (or compatibility) between the needs of humans to use ocean resources and the protection of marine ecosystems and services they provide. This course challenges students to confront issues relevant to human impacts on the marine environment and ask students to engage in a conversation about the best strategies and practices to mitigate these effects based both on prior and new scientific knowledge. Students are tasked with describing the scope of the problem and asked to formulate solutions by providing scientific evidence in the primary literature for ways to solve these 21st-century issues.

The nature of this topic is inherently interdisciplinary. Topics covered in class range from how corals larvae may survive a warming ocean or acidic seas by gaining protection on the molecular level from their parents, or how overfishing of a single pelagic species can have major detrimental impacts on organisms residing at the coasts, or how using dispersants in oil spills may actually prevent the release of hydrocarbons into the atmosphere in an oil spill. Students are asked to incorporate knowledge of ecological theory, environmental chemistry, geology, toxicology, and political science to come up with ideas on how to mitigate and solve problems relating to ocean health and biodiversity.

The final exam in the class is to give a five-minute TED talk with a partner on a [related] topic, [in which] groups explain a technical problem in layman’s terms and communicate the best path forward to solving this problem. This activity gets students to think about their knowledge not just as end points, but rather as tools to help educate the public and devise real-world solutions. In the end, students have developed a greater awareness of technological practices that might act to the detriment of ocean systems, and will put into practice the skills necessary to effectively communicate science to the general public.

All too often scientists don’t leave their laboratory and tell the public why they need to pay attention. They assume their work speaks for itself and are content to allow others to interpret their science for a broader audience. I wanted to teach this class to allow students to explore the marine environment at a perspective they are familiar with—how humans interact with the ocean—and ask students to make connections between their actions and ocean health now and in the future.  Students in this class are reading primary literature and asked to reinterpret this scientific language into digestible material and make meaning of the field in general. They then need to be able to communicate sometimes multidimensional concepts in order to understand an issue and attempt to solve the problem. This task requires students to really understand the nature of the issue before they can tackle solving it. I am fortunate to be able to study a topic that continues to inspire my science and feeds my curiosity. I am hoping to inspire young scientists to think about ways they can act as scientific ambassadors to protect the oceans and its biodiversity for centuries to come. 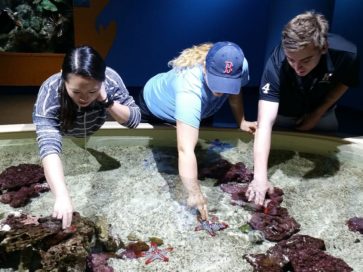 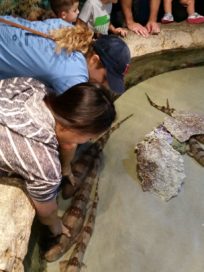 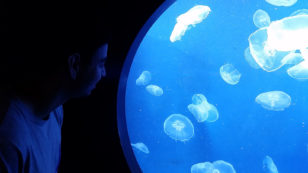 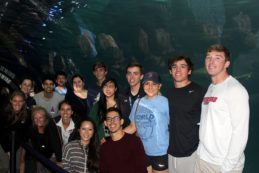 See what other courses the Department of Biology is offering this semester.

Photo from a class trip to the Camden Adventure Aquarium by Victoria Merino ’20 and Kristen Whalen.