Since returning from Fall Break, Haverford students probably noticed an uptick in the amount of orange accessories worn on campus. Perhaps there was even a hoard of students running frantically across Founders Green for a reason other than being late to class. Why? Thanks to the organization of Haverford’s Nerd House and Bryn Mawr’s Doublestar, the nationally popular game Humans vs. Zombies returned to the Bi-Co for the third consecutive year.

Humans vs. Zombies ( HvZ) is a game of tag, but with a thematic element of the zombie apocalypse. The premise is simple: one or more participants start out as zombies. Their job is to “feed,” or tag the human participants, thereby “infecting” them, which can only be done in outdoor, public spaces. Humans can defend themselves by “stunning” zombies with the use of soft projectiles, such as socks, marshmallows, or foam darts, preventing zombies from feeding for 15 minutes. The game continues until either no humans are left, or until time runs out and the  game’s deadline is reached. The Bi-Co game lasted until Oct. 30, and although a number of humans still remained, the zombies still earned the win by gaining a majority.

First-year Maxim Sonin, who ended the game as a zombie, said his favorite part was being part of an ambush that 11 zombies organized “trying and succeeding to catch one guy.” In describing the vigilance required to be a human, he explained, “The game made life hard…every time you are outside, you are taking [a] risk.” 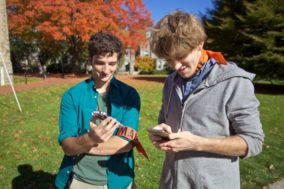 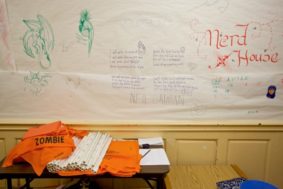 Since its founding in 2005 by two Goucher College students, HvZ has become popular on college campuses all over the United States, and games have popped up on all continents except Antarctica. One reason HvZ is so accessible is its online organization; participants can use the website HvZsource.com to report instances of infection, and track how many humans are left in their game. The HvZ website also supplies official orange bandanas, which players wear on their arms, legs, or heads to signify their status as either zombies or humans.

“People are drawn to new things, things that are… different from their everyday lives,” said Chris Wong ’17, one of the Nerd House organizers of the game. “In a way Humans vs. Zombies is one of the few ways you get to completely immerse [yourself] in a completely different atmosphere.”

The game’s rules also have flexibilities, and a customized Bi-Co version of the rules included changes to vehicle restrictions (such as immunity from tagging while on a bike), as well as prohibition of nerf guns, and special rules specific to Blue Bus stops.

Besides organizing HvZ, Nerd House, one of the campus’ community housing options, sponsors weekend events open to the entire Haverford community, including video game tournaments, film screenings, and theme parties. Wong emphasized that the events maintain “an open environment” that leave the space open to people who aren’t necessarily interested in the main event, but are seeking an alternative to more mainstream social events. In this way, Nerd House has a way of bringing people together. HvZ has a similar effect.

“It requires you to cooperate with others a lot more… that you might not interact with otherwise,” Wong explained. “If you’re walking to your 10 a.m. class, you have like three other people on the road with you. … In HvZ, you either have to keep an eye out for them, because they might be zombies… or you have to basically team up with them.”

Looking forward, members of Nerd House plan to continue organizing the game that has attracted more than 100 participants every year.