As part of the Hurford Center’s weekly CROSSLISTED series, Monique Bryars ’19 held a makeup demonstration in the Cantor Fitzgerald Art Gallery Lounge on Friday, October 30, just in time for Halloween weekend. Madeline Perry ’18 volunteered to be the model, and Bryars made her up to be a sinister mermaid. First, Bryars slathered latex modeling wax on Perry’s arm and face, and then sculpted and airbrushed it to look like bleeding gashes. She also demonstrated how to attach a prosthetic to skin. (In this case, the prosthetic was a seashell she made out of cardboard and paint that she affixed to Perry’s back). The result was a beautifully morbid depiction of a creepy Halloween mermaid. 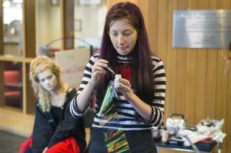 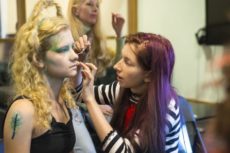 Bryars has been involved in makeup and costume design for only a couple of years, but she has been involved in theater since she was two. She is often inspired by “simple concepts,” she says, “like inanimate objects, or complex, intangible concepts, like emotions.” Bryars’ creativity knows no bounds—she once carved four-inch wedge heels out of wood—and she is incredibly passionate about her creations. “I usually imagine a character or a backstory, a whole life behind each costume, and dress up according to that,” she says.

Bryars, who, in addition to being a makeup artist and actor, is also a cosplayer, poet, and painter, is interested in conceptual costuming because human beings are such large and dynamic canvases. “People have a very specific way of interpreting people, and when you wear something, it interacts with that sort of interface,” she says. “You take that into account when you dress up as something, so a two-dimensional piece doesn’t have the same connotation as a person does.”

Want to see more of Bryars’ artistry? She models her various creations on her Facebook page.