Dawit Habtemariam ’15 returned to campus on Oct. 23 to screen his award-winning documentary, Family Affairs, at James House, the student arts building. The screening was a special edition of the Hurford Center for the Arts and Humanities’ weekly CROSSLISTED series, which brings together students, faculty, and staff working with the Center on Friday afternoons for discussions and pastries.

Dawit made the film, with editing and camerawork help from Maya Yu Zhang BMC ’15, for his “Film on Photography” class last spring, and it went on to win the Creative Non-Fiction Filmmaking Award at the 2015 Tri-College Film Festival. 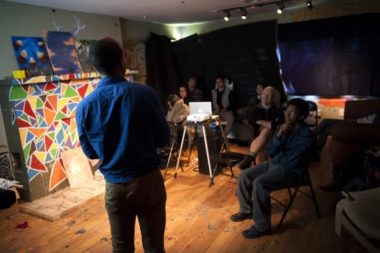 For those who missed the film during last year’s festival, Family Affairs sheds light on America’s white-supremacist past, aiming to bridge the gap towards the 21st century. Habtemariam juxtaposes present-day video footage of Haverford with black-and-white photographs from the early 20th century, showcasing smiling families and friends while audio of a spring day and pleasant pleasant conversations play.

To say anything further would be to ruin the twist of the film and dampen its impact. Watch it for yourself on Vimeo.