The 10th annual Classics Marathon, featuring a student-led staged reading of Aristophanes’ The Clouds, was held on Thursday evening in the Sunken Lounge of the Haverford Dining Center.

Each year since 2006, the Classics Department has organized a theatrical event during the fall semester, alternating between all-day readings of longer works and staged performances of shorter ones. (In the past, texts included Plato’s Symposium, Virgil’s Aeneid, Aeschylus’ Oresteia, Ovid’s Metamorphoses, Aristophanes’ Lysistrata, Apuleius’ The Golden Ass, and Seneca’s Medea.) Following last year’s truly “marathon” 12-hour reading of Homer’s Iliad, this year’s performance started at 7 p.m. and was finished by 9:30 p.m.

First produced in 423 BCE, The Clouds is a Greek comedy about a rural Athenian named Strepsiades (played by James Burvant ’16) who seeks to solve his financial problems by enrolling in “The Pondertorium” school of Socrates (played by Zakery Oglesby ’17). The staged reading featured actors from different class years and levels of experience in the classics (as well as a few professors). 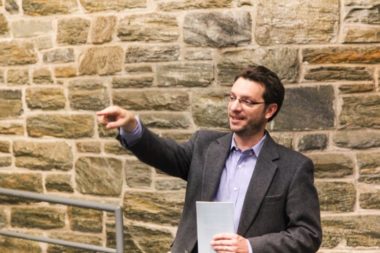 “Most of the classical works that we read in class were originally performed,” explained Associate Professor of Classics Bret Mulligan, who organized this year’s event. “We wanted to remind ourselves of that performance element, while creating an event in which members of the Bi-Co community could participate as performers or active spectators. We also wanted to bring these authors and texts that we love and respect to an audience outside of our regular classes.”

The marathon’s central location (and dinner-adjacent performance time) allowed members of the Haverford community to observe the production as they walked in and out of the Dining Center, giving everyone a chance to have a few laughs.