Friday, Oct. 23, the Cantor Fitzgerald Gallery opened its latest show, The Wall in Our Heads: American Artists and the Berlin Wall, curated by Haverford Postdoctoral Writing Fellow Paul M. Farber.  The show, which comes to campus after a well-received run last fall at the Goethe-Institut in Washington, D.C., gathers the work of 23 American artists, including Nan Goldin, Keith Haring, and Public Enemy’s Chuck D, who have all used the Berlin Wall as a site and symbol for global forms of division. 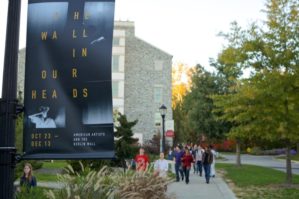 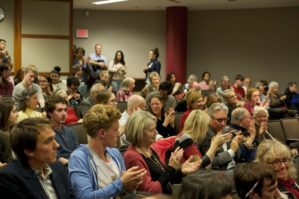 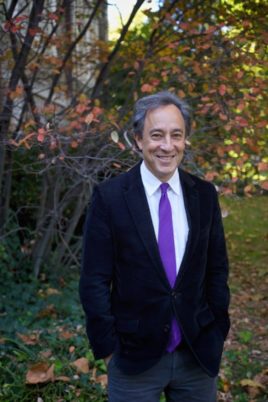 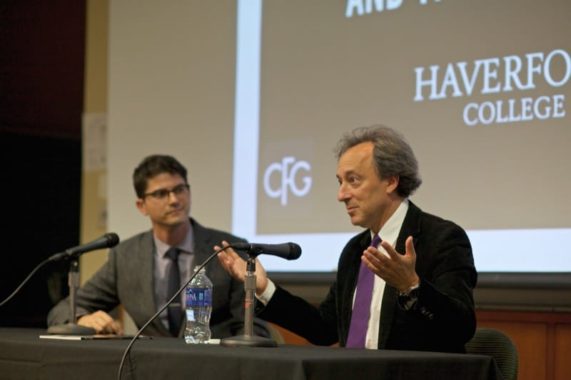 The show’s opening was preceded by a conversation between Farber, the curator, and Michael Kimmelman, architecture critic for The New York Times. The talk, which was held in Sharpless Auditorium, drew a standing-room-only crowd and covered art, the Cold War, gentrification, and the refugee crisis currently facing Europe. Kimmelman and Farber shared anecdotes in a lively dialogue on Berlin, weighing the presence of the city’s traumatic history with its sense of continuously being a space of “becoming” for its citizens, its guests, and even its architectural identity. Afterwards, a reception was held in the gallery, and several of the show’s featured artists were in attendance. 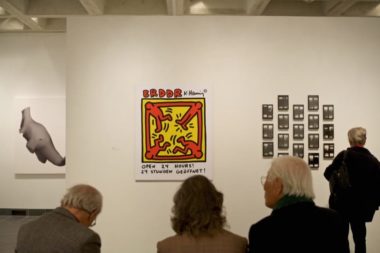 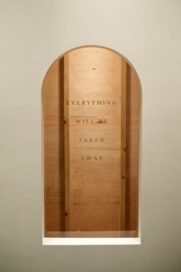 A piece by Adrian Piper

Emily Williams ’19 and Maggie Heffernan ’16 point at a map made by Bill Van Parys and Reyes Melendez. 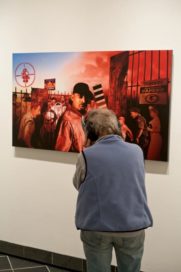 A visitor interacts with a piece by Chuck D.

Elke Susannah Freed, daughter of photographer Leonard Freed, stands by one of her father’s photographs. 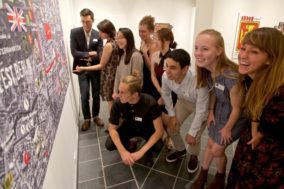 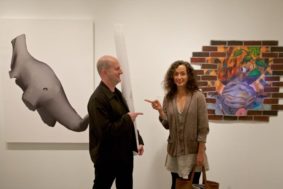 Artists James Huckenpahler and Nilay Lawson stand by their respective works.
The Wall in Our Heads runs through Dec. 13, and is presented by the John B. Hurford ’60 Center for the Arts and Humanities with the support of Haverford’s new Initiative in Ethical Engagement and Leadership. Additional programming related to the exhibit is forthcoming, including a talk by Cornell’s Penny Von Eschen on Nov. 6, a roundtable discussion on civic barriers and bridges on Dec. 3, and a Dec. 13 closing conversation between Director of the Berlin Wall Foundation Axel Klausmeier and George Washington University Associate Professor of History Hope M. Harrison. Details and additional event information can be found here.
Photos by Caleb Eckert ’17