“I would rather be a bad feminist than no feminist at all,” said Roxane Gay to the gathered crowd in Haverford College’s Marshall Auditorium on Oct. 2. Bad Feminist is even the title the Purdue University associate professor gave her 2014 essay collection. In that New York Times bestseller, she muses on what she calls her “contradictions,” her likes and beliefs that might be frowned upon by of more traditional feminists, such as enjoying rap songs that degrade women and having a fondness for stereotypically female things, like high fashion, maxi dresses, Vogue, and the color pink.

At her on-campus talk, organized by Students’ Council Speakers Committee, she asked how many in the audience were feminists. There was applause and cheers.

“Beat up the people who didn’t raise their hands,” she said, drawing laughter. “Sometimes feminists have to be violent.”

Gay, who is also novelist, read from some of her already published work, including Bad Feminist, and new material, like a short story about her love for a UPS delivery man.

She was alternately funny and thought-provoking, wrapping up her talk with a lively question-and-answer session in which she shared light aspects of her life–chocolate-chip cookies and “anything with cherries” are her favorite items to bake, she’s currently playing 27 on-line Scrabble-like games, and she loves TV’s Scandal–as well as deeper thoughts about unity.

“Don’t create strange barriers around yourself. Everyone’s different and it’s important to embrace differences,” she said, encouraging audience to look at others and imagine life in their bodies, with their skin colors, and dealing with their issues of sexuality or disability.

“I think working from a place of empathy is what makes the … differences a lot easier,” she said. “I believe in starting there and listening.” 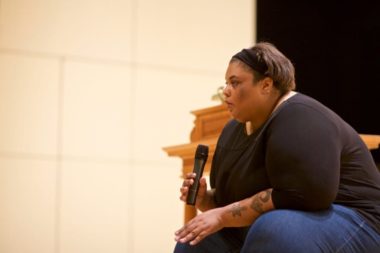 One audience member asked how, as a white woman, she could keep her privileged background from affecting her efforts as a feminist. In September Gay made headlines when she and author Erica Jong were asked a similarly themed question at a Georgia book festival. Gay said history showed many cases of white feminists excluding women of color. Jung took offense at the remark. The tension on stage for the rest of the evening was palpable, those in the audience later said on social media.

At Haverford, Gay said she thought much of the white feminist debate was a “lot of political gaming in the on-line sphere.” That said, she does also think there is also “white feminist type, who acts like they’re opening the doors to feminism, as if they’re gate keepers.”

“So you have to remember you are not a gate keeper,” Gay said. “You are a part of a larger collective of womenhood that spans race, gender, ethnicity, sexuality, class, faith and so on and so forth. Just remembering that no one is any one thing. Remembering we all have multiple identities will keep you from falling in the white feminist trap.”

And, Gay noted, “Don’t be afraid of feminism. Feminism wants you.”