On Sunday, Oct. 4, the campus community convened in the Calvin Gooding Arena to participate in Fall Plenary, an annual, school-wide vote on student-proposed resolutions and the yearly ratification of the alcohol policy.

In order for proceedings to commence, quorum must be reached, which means that at least half of students living at Haverford must be present. This year, quorum was reached rather quickly, about 20 minutes after doors opened at 6 p.m.

Plenary is facilitated by the Haverford Students’ Council, which is composed of two co-presidents, co-vice presidents, co-treasurers, and co-secretaries, as well as officers of athletics, arts, academics, campus life, and multiculturalism, and one representative from each class.

This year, only two resolutions were proposed, as opposed to last spring’s eight. One involved revisions to Plenary voting procedure, and the other concerned the responsibilities of Students’ Council members. Plenary is a well-established tradition at Haverford, and it serves as a vital piece of the school’s student-centered experience. 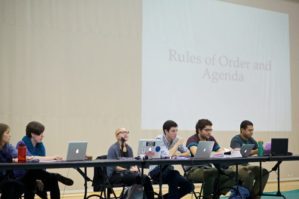 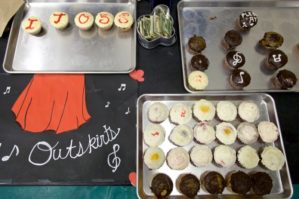 A cappella group the Outskirts held a bake sale during Plenary, providing yummy snacks for the proceedings. 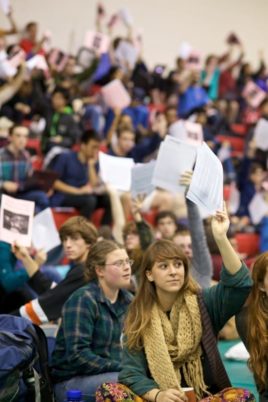 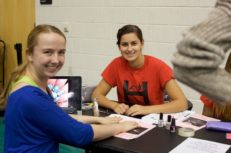 Ali Lamacki ’16 gets her nails painted by Alexandra Morrison ’18 as part of a Fencing Team fundraiser at Plenary.

Katie Tsai ’16 has her nails painted by a member of the Fencing Team for a fundraiser. 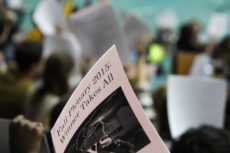 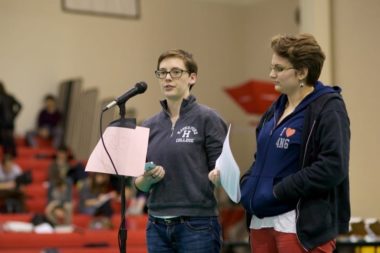 Voting in the crowded arena in the GIAC.

“The fact that we have right now… nearly 600 maybe 700 people coming into one room on campus, out of the 1200 people in the community is huge,” said Jason Hirsch ‘16, current co-president of Students’ Council. “No other schools really have something like this…the fact that anyone can go up there and voice their opinion on a resolution… the fact that we have voting procedures and everyone has a say, it’s great.”

Plenary is one resounding example of Haverford’s emphasis on student governance, and is a practical application of the school’s Honor Code, which emphasizes communication and dialogue in resolving issues, both campus-wide and in person-to-person interactions. For first-year students, Sunday was their first exposure to Plenary, and they, along with their classmates, were able to witness and actively participate in this unique Haverford event. In the spring, another Plenary session will be held to vote on additional resolutions as well as the ever-important Honor Code, which must be ratified annually.