Do-it-yourself (or DIY) culture extends from independent music scenes, pirate radio, and self-published zines to crafts, construction, home improvement, and even technology. This past weekend some Tri-Co students, staff, faculty, and local community members, with help from New York-based artist and publishing collective Mare Liberum, put the DIY ethos to work in the realm of transportation, making a boat that was fit to float.

As a part of this past year’s Critical Making series of talks and workshops (which also brought Mac Smith of the experimental “Google [x]” lab and Matt Ratto, head of University of Toronto’s Critical Making Lab to campus) and in conjunction with Joshua Moses’ course “Do It Yourself Movements and American Environmentalism,” Mare Liberum members Dylan Gauthier, Ben Cohen, and Stephan von Muehlen came to Haverford to talk about their work (including the participatory public art project “Sea Change,” in which the collective traveled the length of the Hudson River in homemade paper canoes leading up to the People’s Climate March in New York City in 2014) and lead a boatbuilding workshop.

The roughly 30 students, ship enthusiasts, and faculty from English, Fine Arts, Anthropology, Political Science, East Asian Languages and Cultures, and Environmental Studies who showed up on Saturday in the Foundry behind Marshall Fine Arts Center came together to make a punt, a flat-bottomed boat with a square bow intended for use in shallow, calm waters, from scratch. After sawing, cutting, drilling, and screwing their wooden craft together, the team hauled it to Bartram’s Garden and launched it on the Schuylkill River, where the vessel, indeed, proved seaworthy. 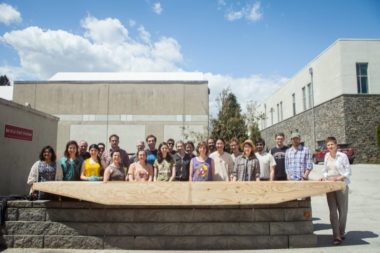 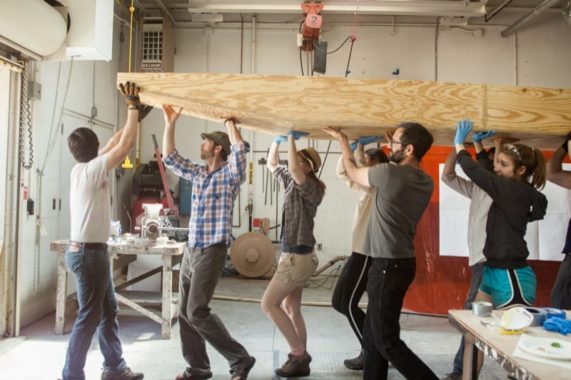