Balancing a strong mix of educational campaigns and direct action events on and off campus, Haverfordians for a Livable Future (HLF) has worked relentlessly to promote environmental justice at Haverford College and beyond since its inception in 2012. The club has taken on campaigns to get Haverford to divest from fossil fuel investments, oppose mountaintop mining, and rally support for climate change issues.

What else: HLF was launched with its Divest Haverford! campaign in 2012, which is currently in its third year.

Mission and Goals: HLF hopes to encourage environmental justice through structural changes at Haverford. One of the main goals is to get Haverford to divest its endowment from fossil fuel companies in a way that respects the financial integrity of the institution.

In line with this goal, this semester the club hopes to organize students, faculty, and alumni to demonstrate their support in favor of divestment to the Board of Managers.

“Divestment is important because it is our best tactic—a tactic that has been proven effective in the past—to diminish the fossil fuel industry’s enormous power over our national government, allowing the nation to move forward on necessary progressive climate change legislation,” Gutman says. 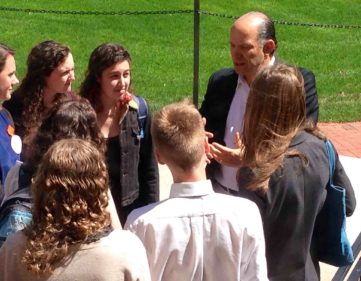 After discussing divestment with the Board of Managers on Apr. 24, members of HLF continued the conversation with Board Chair Howard Lutnick ’83.

Students participate in the Bi-Co march in 2013.

HLF participates in a teach-in at the Dining Center, where the Divest Haverford! campaign was launched in 2012. 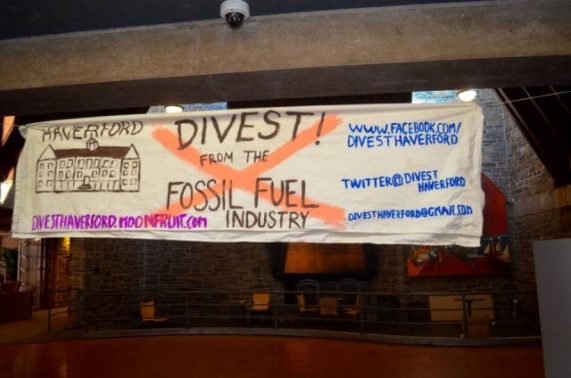 A HLF banner is displayed at the Dining Center.

Where: HLF has hosted both on- and off-campus direct action events. They organized a Bi-Co march, an art-based action with “oil-spilled” paper cranes displayed around campus, a die-in (mimicking an oil spill) on Founders Green, and delivered letters to administrators and Board members.

“I’ve gotten to go to a bunch of rallies and events through my work with HLF,” Rowlett says. “One of the most inspiring was the Forward on Climate rally that happened in February 2013. More than 35,000 people attended to protest the building of the Keystone XL pipeline. It was one of the first big climate actions I ever participated in, and it was just really energizing to know that so many other people are passionate about the same issues we are.”

Current Events: This semester they hosted an activist from the Radical Action for Mountain People’s Survival (RAMPS) group who spoke about a recent chemical spill in West Virginia and about prison inmates who, the group says, are being served water contaminated by toxic coal chemicals. RAMPS is a non-violent direct action campaign based in West Virginia. The club also participated in an Impact Investing series, organized by Haverford’s economics department, where they responded to a pro-fracking speaker about the harmful effects of natural gas for the planet.  The April meeting of Haverford’s Board of Managers included a 90-minute session with HLF devoted to understanding the rationale and ramifications of divestment, a conversation that will continue in the coming months.

Did you know: HLF had more than 60 students participate in the People’s Climate March in New York City in September 2014, said to be the largest climate rally in U.S history.  They also organize with other social-justice oriented clubs such as EarthQuakers, EHaus and Rethink Incarceration, as well as off-campus organizations that include 350.org and Earth Quaker Action Team.