With banners in Spanish draped across walls, cameras flashing, and people sitting cross-legged in the aisles, Sharpless Auditorium was buzzing with energy as a crowd filled the space to hear the group speak about the horrific incident, a stark reminder of the recurring violence and impunity that is corroding the state, and the Mexican national government’s excruciatingly slow response.

The three asked for the support of those present in demanding the Mexican and U.S. governments hold those responsible accountable for the crime. As they spoke, a petition demanding the halt of U.S. military aid to Mexico was circulated around the auditorium, along with photos of the 43 Mexican students.

A banner is displayed at Caravana 43 with words of support.

Banners in Spanish are draped across the wall at Sharpless Auditorium for the Caravana 43 event. 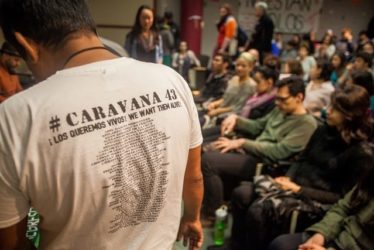 A shirt worn by Felipe de la cruz Sandoval, the father of a survivor, reads “Los Quermos Vivos” or “We Want Them Alive” at the Caravana 43 event. 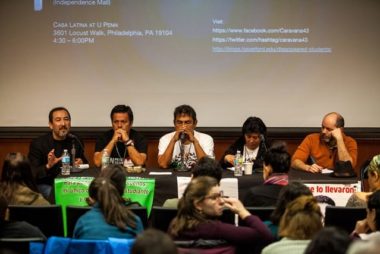 A full house listens raptly to the panelists at the Caravana 43 event.

Attendees before the start of Caravana 43 Calling for Justice: A Dialogue with Relatives of Ayotzinapa’s Disappeared Students.” 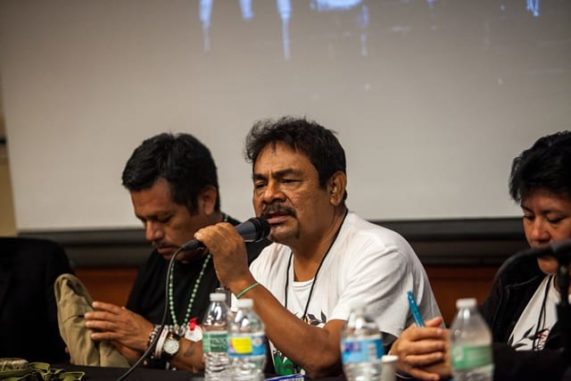 Felipe De la Cruz Sandoval, the father of a survivor, speaks at the Caravana 43 event.

“When tragedies like this happen, it is sometimes difficult to understand how life continues forward with little attention paid to the implications of these events,” said Bryn Mawr College student Marcela Dorfsman-Hopkins ’15, one of the student volunteers, who also recently helped organize a teach-in about the situation in Mexico. “As a Mexican American I immediately felt a responsibility to continue dialogue on growing structural corruption of the Mexican narco-government, but as a student, anthropologist, human rights activist, and most basically, as a person, I felt a responsibility to fight for the lives of my peers.”

According to Haverford Professor of Spanish Aurelia Gómez:  “The goal for organizing this event at Haverford is to add our voices to international rejection of violence, torture, and disappearance, manifest our support to the relatives of disappeared students, listen to them as a crucial part of calling for justice and accountability, provide visibility internationally, and educate a larger audience about why Ayotzinapa events uncover a larger crisis.”

After the discussion, audience members held up pictures of the Mexican students in a show of solidarity. The U.S. tour, dubbed “Caravana 43 Calling for Justice: A Dialogue with Relatives of Ayotzinapa’s Disappeared Students,” was organized by the Spanish departments at Haverford and Bryn Mawr College, the Center for Peace and Global Citizenship, the Haverford Provost’s Office, the Department of Latin American, Latino, and Iberian Peoples and Cultures (LALIPC) at Bryn Mawr, and more than 180 other organizations. Several activities were planned in Philadelphia through April 10, with events taking place at Temple University, the University of Pennsylvania, and Fleisher Art Memorial, along with a demonstration at Love Park.

Check this blog by created by  Dorfsman-Hopkins and  Gómez for more information and updates about the missing students. Additionally, here is the live broadcast of the event.