The T-shirts hang from clotheslines along the walkway near the Running Man sculpture and near the South Parking Lot on campus. The cheery pinks, blues, yellows and other hues of the display, however, belie the serious, often troubling messages written on the fronts of the shirts.

Says one: “What do you expect would happen … dressed like that?” I didn’t expect to become another statistic.

Another asks: How can you ask for it if you don’t know what it (sex) is? 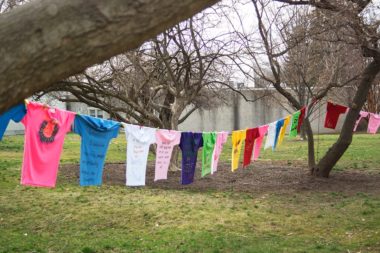 The Clothesline Project is on campus through April 12.

The Women*s Center and SOAR are sponsors of The Clothesline Project at Haverford.

Students, either survivors of sexual violence or allies, decorated T-shirts that hang on a clothesline near the Running Man statue. 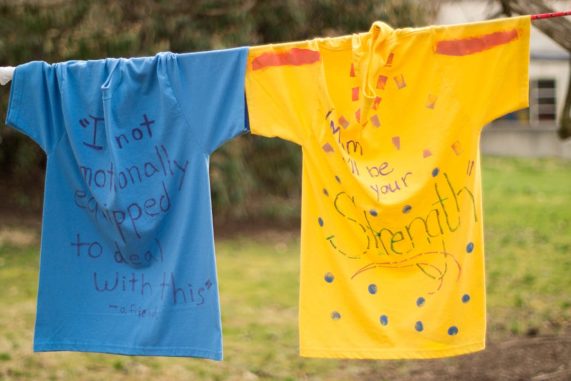 Known as The Clothesline Project, the effort began in Cape Cod in 1990 as a way to address violence against women.  According to the group’s website, the shirts are “a vehicle for women affected by violence to express their emotions,” and hanging them on a clothesline allows them to be “viewed by others as testimony to the problem of violence against women.”

The project is underway at Haverford through this week and features submissions from Haverford and Bryn Mawr College community members of any gender identity.

The sponsors of The Clothesline Project on campus are Haverford’s Women*s Center and SOAR: Survivors of Assault and Rape, a Bi-Co student-led support group. “We hope that it creates a space where survivors can safely share their story and have it witnessed by the community,” the sponsors wrote by email. “We also hope it helps survivors see that they are not alone, and there are many others struggling, surviving, and thriving right along side of them. Finally, we hope the [the project] breaks through the silence of sexual and domestic violence and promotes awareness that violence impacts many members of our community.”