Deviating from the typical let’s-soak-up-the-sun-type college spring break, many Haverford students instead lobbied Congress, built houses, went dancing, and participated in conferences as part of several alternative activities organized by students and other groups on campus. 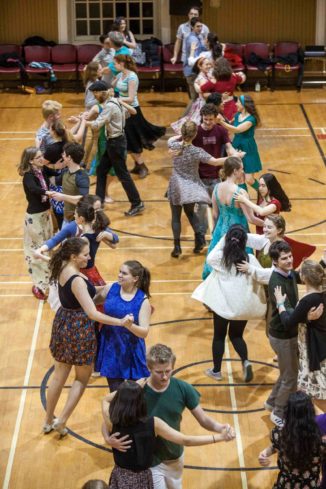 On March 27, students and others gathered for the third Community Contra Dance. 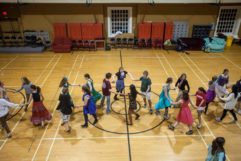 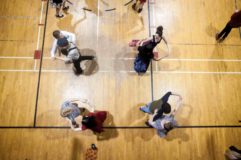 Ryan Gym is transformed into a dance floor as the Folk Club hosts a Community Contra Dance. 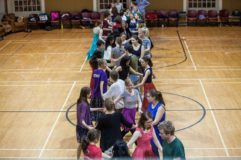 Folk Dance: The Folk Dance club went on a five-day spree of folk dancing (English, Contra, and Square) around the Washington D.C. area. A favorite moment for many was going to the contra dance at Glen Echo, Md., which has the largest weekly dance in the country held in a beautiful hall.  The event was organized by Jeremy Steinberg ’16 and Natalie Martin ’15, who unfortunately had to skip the trip to attend to the arduous task of thesis-ing. Club members Henry Bradford ‘15, Elizabeth Peters ‘15, James Truitt ‘17, and Cristian Clothier ’18 also attended. Back at Haverford with their dancing shoes still on, the Club hosted a Community Contra on March 27.

HOAP Trips:  Two trips—one to Charleston, S.C., and the other to Birmingham, Ala.—were organized by 8th Dimension, which is Haverford’s Office of Community Service, as part of its annual alternative spring break trips. Students spent time rebuilding and restoring homes in low-income communities in conjunction with Habitat for Humanity.

Spring Lobby Day: Sponsored by the Quaker Affairs Office (QAO) and Center for Peace and Global Citizenship (CPGC), the group of eight students had a hands-on experience of citizen lobbying to support current legislative initiatives to address the effects of climate change. Students participated in issue briefings, lobbying trainings, and office visits with their House members and senators. The trip was organized by Jean Leighton ’17 and Damon Motz-Storey ’16. 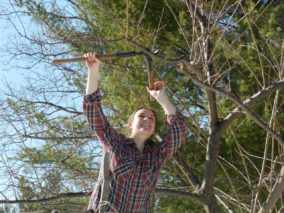 A student trims branches at Canaan-Quaker Intentional Village as part of an alternative spring break trip. 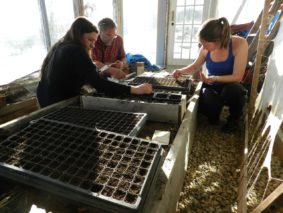 Quaker Intentional Village:  As part of a unique element of the Friends-in-Residence Program held this year, three students—Rosemary Ventura ‘16, Ruth Bagley  ‘17, and Adriana Cvitkovic ‘16—were introduced to the experience of intentional community living at Canaan, a Quaker Intentional Village. Organized by QAO, students participated in activities related to agriculture, community, and rural life. These included care for sheep and chickens, maple sugaring, taking a chicken from coop to soup, and discussions about community living, the environment, and social justice.

White Privilege Conference (WPC): Organized by QAO and sponsored by CPGC, Dean’s Office, and the President’s Office, the conference gave 28 students and four administrators an opportunity to learn about the role of privilege in undermining efforts to achieve racial-justice inclusion. This was held in advance of the WPC Philadelphia conference in spring 2016.

“This served as a reminder that no matter how much progress I’d like to think I’ve made, this work could fill a lifetime,” says one of the student participants in a survey response. “However, the wonderful people I met at the conference showed me that the work can also be a source of joy.”

Adds another student, “I realize that the most valuable moments for me were moments that reminded me of the emotional power of anti-racist action, thought, and work.”

Participants will provide the college community, senior staff, and Task Force on Diversity and Community with a report about the conference, which is being organized by Clara Abbott ‘18 and QAO. The objective is to significantly increase Haverford’s participation in the WPC next year.