Not many students know that Haverford had one of the first college radio stations in the country. Despite facing many setbacks and challenges, including being off the air for a number of years, the radio station is broadcasting once more, and has been operating with renewed vigor and energy since Spring 2014.

What:  WHRC is the Haverford-Bryn Mawr (Bi-Co) Radio Club. It was revived by members of the class of 2014, including Karl Moll and Thy Vo, among others. Six students currently run the club:  Nicholas Giannasca ’15, general manager; Lee Rosenthal ’15, library director; Andrew Szczurek ’16, music director;  Ben Horwitz ’17, programming director; Chloe Schwartz ’17, promotions director, and Casey Falk ’16, tech manager. WHRC, which has around 70 members, is now run as a “web-based collective of audio content and multimedia generated by the Bi-Co community,” according to the club’s website.

What’s WHRC’s Most Popular Show? One of its biggest hits was “Office Hours with Tron,” a talk show about what’s what on campus with an eclectic mix of music, hosted by Martin Richard ’14.

What else? This semester the club hosted an open-mic night at Haverford, and club members hope to reprise the event. They also are looking at bringing in live performers whose music is being promoted by WHRC’s DJs. 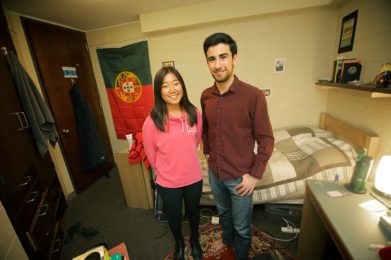 Haverford students Hanna Yoon ’18 and Ben Burke ’18 in their self-described “high-tech studio,” that is Burke’s dorm room. Together, the two co-host the weekly radio show “The Clerk Newshour,” where they cover “news on campus, and any world news that strikes our fancy.” Photo by Ryan Gooding Photography

Hanna Yoon ’18 and Ben Burke ’18 host “The Clerk Newshour” on Haverford’s WHRC, one of the oldest college stations around. Photo by Ryan Gooding Photography

Where: The WHRC studios are located in the basement of the Dining Center. Those studios had been abandoned when the station went off the air in 1994 and the Dining Center took over the space, “haphazardly stacking dishes and equipment on top of records,” according to a Philadelphia Inquirer article.

Mission: “Our mission is to give students the opportunity to share music, news, musings, and almost anything else with the Bi-Co community,” Giannasca says. The club is constantly on the lookout for new members, and any student can join and help build WHRC’s reach and engagement on campus.

“Engagement has been increasing at a snail’s pace,” he says. “It is nowhere near what we at the station would like it to be. We truly believe that [WHRC] is something everyone will benefit from in some way or another, and we want to convince people of that. Radio can be a source for news, debate, musical inquiry, and so much more. It can offer something to everybody.”

Did You Know? Haverford’s radio station, first called WABQ, was started in 1923 and was one of the most influential college stations in the country. Since then, it has been reborn as WHAV and then, due to a request by Federal Communications Commission, its call letters were changed to WHRC in 1946.