All aboard at Platform 9 3/4 to visit the Chemistry Department turned Hogwarts School of Witchcraft and Wizardry ala the Harry Potter series. The Rotunda was draped with long banners representing each of the four Hogwart houses: Gryffindor, Hufflepuff, Ravenclaw and Slytherin. Potions, including a purple Polyjuice Potion, pink Beguiling Bubbles and a jar of mandrake leaves, filled the window boxes along the stairwell.  The Harry Potter references continued with a dining hall in the 2nd floor hallway of the East Wing, and each chemistry professor’s office door was covered with a life-size sketch of a character from the beloved series drawn around a picture of the prof’s face.

Assistant Professor of Chemistry Lou Charkoudian’s office door was tagged with Hermione. “I have not read Harry Potter,” she allowed, but her students filled her in about the smart, book worm heroine of the series. “My students tell me it’s quite an honor. I’m flattered.” A 2003 graduate of Haverford, Charkoudian remembers participating in this same tradition. “It’s great,” she says. “April can be hard. Everyone is looking at the finish line at this point. [This tradition] brings a lot of energy.” 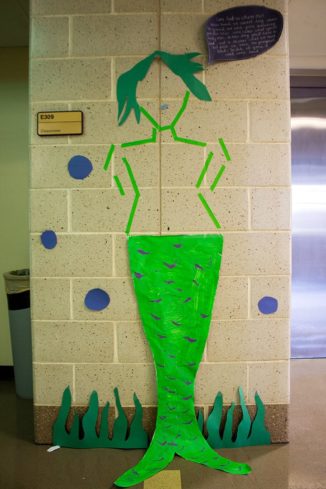 Remember the Merpeople in the Great Lake in Harry Potter’s world? 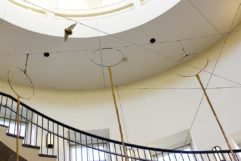 The Golden Snitch sails through the Quidditch Pitch in the Rotunda of KINSC. 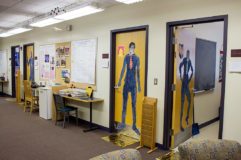 Harry and his friends (and a few enemies) appear on the doors of chemistry professors. 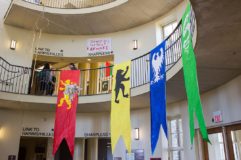 Chemistry students recreate the banners of Hogwarts’ houses as part of the April Fool’s Day celebration. 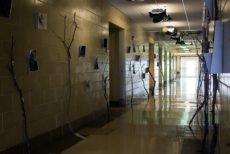 The eerie Forbidden Forest is recreated by students. 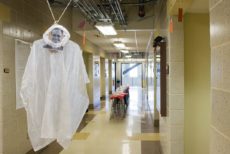 Chemistry major Rebecca Wai ’15 of Lansdale, Pa., helped put up the decorations. “It’s a lot of fun,” she says of the tradition. “It’s a nice way to do something all together as a department — other than study.”

Elsewhere in KINSC, biology students went Disney, with a heavy focus on Snow White and the Seven Dwarfs. Sharpless Auditorium was labeled the Dwarf Mine and a corner of the main lounge was remade into the Dwarfs’ cozy dwelling. The Huntsman (as in the fairy tale twist Snow White and the Huntsman) and characters from Cars, Monsters, Inc., etc., also made appearances on professors’ office doors. 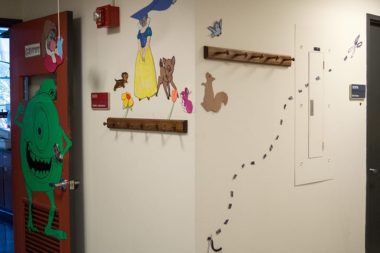 Disney fun is on display in the Biology Department.

This is the way to the Drwarfs’ Dwelling. 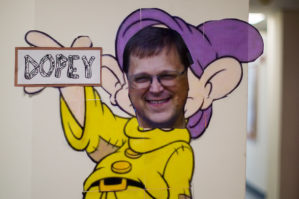 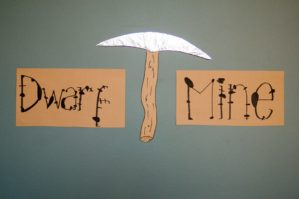 The Dwarf Mine, a.k.a. Sharpless Auditorium, is a dark, scary space — on April Fool’s Day, anyway. 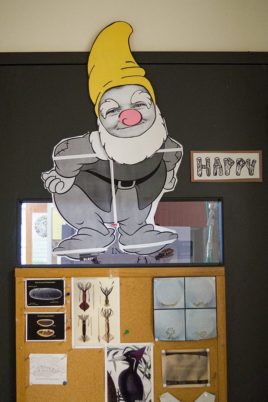 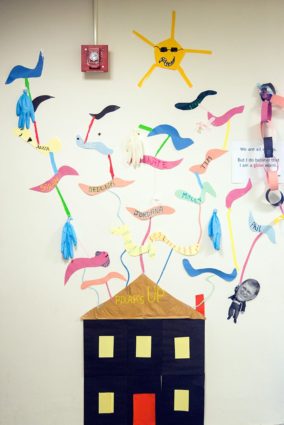 “Up” we go at KINSC on April Fool’s Day. 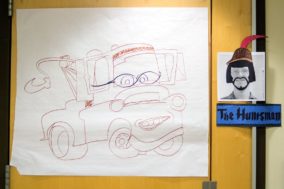 Mater and the Huntsman make appearances. 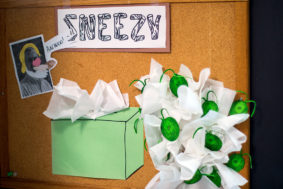 Those formula-crazed math students turned the math lounge “inverse” or opposite,  flipping things around. Water barrels moved from the table to the floor, furniture was shifted and an inverse Haverford College banner hung on the wall. “It’s funny,” says Amelia DiAngelo ’17, of Oak Ridge, Tenn., who is majoring in math. “I like it a lot.”

Psychology delved into the Jungle Book with green streamers and balloons marked with tiger stripes, cheetah spots and other animal prints. Computer Science, of course, recreated — or is that recoded? — The Matrix with black streamers with glowing green code and pictures of professors with those Matrix agent dark shades.

Finally, Physics, not to be outdone, had some fun with Legos. The pièce de résistance was a contraption that moved a small ball through a maze. Look for more pictures to come throughout the day. 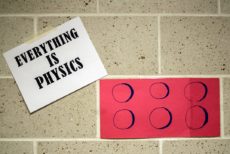 Physics students have some Lego fun. 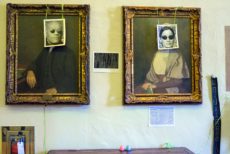 Morpheus and Trinity of The Matrix assume hallowed places. 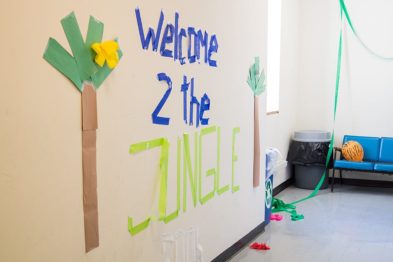 The Psychology Department turns into a jungle. 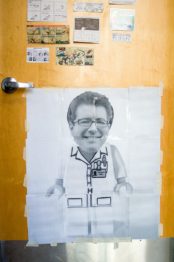 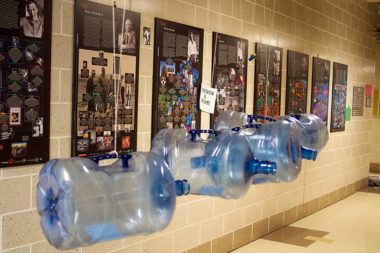 Physics is at work on April Fool’s Day.

Welcome to the Matrix at KINSC. 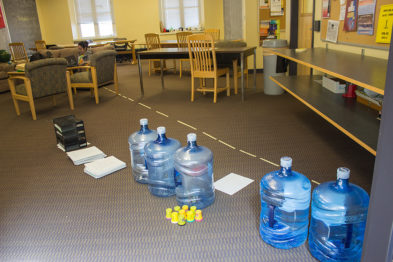 What’s happened to the Math Lounge? It’s all inverse. 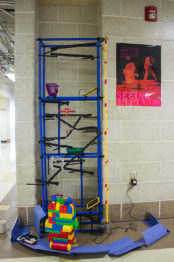 A very cool contraption is part of the Physics Department’s display. 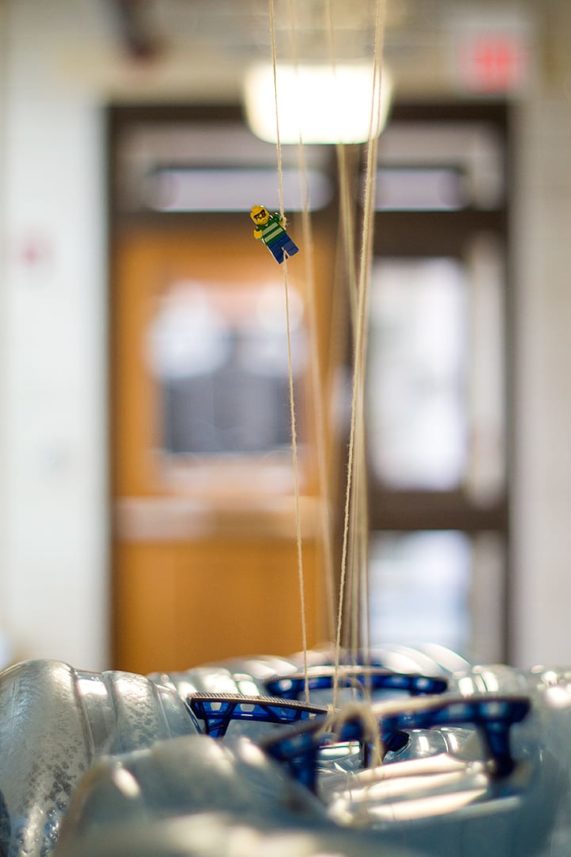 Is that a physics student?