According to some calculations, Haverford College boasts the most a cappella groups per capita of any college in the nation—10 at last count. But that doesn’t stop us from inviting more to campus. For a special concert March 21 in Zubrow Commons, the Mainliners invited Bryn Mawr’s Night Owls and the Stanford Fleet Street Singers to perform alongside them in a collaboration that was born out of the Mainliners’ own touring experience.

“I was particularly excited for this show following our fantastic road show at Johns Hopkins over spring break,” says Mainliners member Robin Banerji ’15. “I was really excited to do the same thing at home. After our show on Saturday, a lot of us had the chance to chat with the members of the other groups. I sat down with the musical director of the Fleet Street Singers, and I think we learned a lot from each other.”

Another member of the Mainliners, Nina Leonard ’15 agreed. “We had never worked with either of these groups, and in an a cappella atmosphere that can often remain rather insular, with groups singing with the same groups over and over, it is really refreshing to mix things up.”

The room was packed full of students eager to hear some familiar tunes, such as The Mainliners’ performances of “Love Took Me Down To the River To Silence Me” and “Steve McQueen,” as well as some new ones.

For more on Haverford’s a cappella groups, see the Fall 2011 issue of Haverford Magazine. 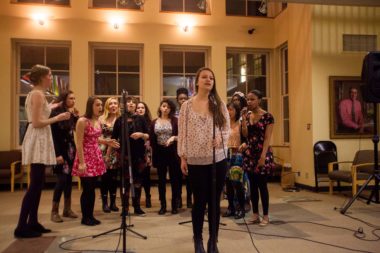 The BMC Night Owls were the first to perform in the March 21st concert in Zubrow Commons.

Zubrow Commons was packed for the show. 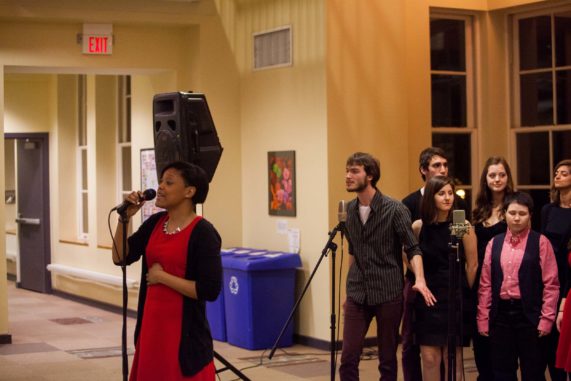 Natasha Stanley ’15 and the BiCo Mainliners closed out the evening.