In the 1950s and 1960s, Latin American politics and society were roiled by economic turmoil, bombings, and militaristic regimes. Against this backdrop, a number of artists sought to question and negate the apparent need for violence through artistic processes of burning, tearing, splintering, cracking, demolition, and evisceration. A new exhibition, Arqueologías de destruccíon/Archaeologies of Destruction 1958-2014, that explores these issues opened on March 20 at Haverford College’s Cantor Fitzgerald Gallery. Curator and writer Jennifer Burris Staton, based in Mexico City, gave a gallery talk and tour of the work of the six featured artists to about 125 people, who braved a Spring snow storm to attend. 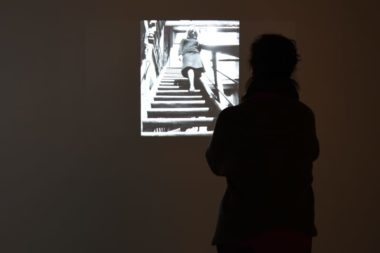 A visitor to the opening reception and tour of the new exhibit “Arqueologías de destrucción/ Archaeologies of Destruction, 1958-2014” explores the show.

Associate Professor of English Gustavus Stadler (right) examines an installation during the curator tour and opening reception for “Arqueologías de destrucción/Archaeologies of Destruction.” 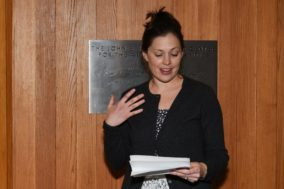 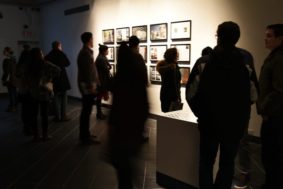 The opening reception for the new exhibit attracted about 125 people.

The powerful collection of work traces the remnants and histories of the original “destruction art” movement, which continues to reverberate to the present, through the works of Raphael Montañez Ortiz, Kenneth Kemble, Marta Minujín, Ana Mendieta, Marcos Kurtycz, and Eduardo Abaroa, all with  ties to Latin America. Through a mix of mediums, including videos, slideshows, prints, sound, and sculptural objects, the exhibit shatters both self and society while hinting at a path to move forward. As New Jersey artist Ortiz has written: “These artists are destructivists and do not pretend to play at God’s happy game of creation; on the contrary, theirs is a response to the pervading will to kill.”

Archaeologies of Destruction is the Cantor Fitzgerald Gallery’s first bilingual show, featuring a 144-page exhibition catalogue in both Spanish and English with contributions from Justin Hoffmann and Mara Polgovsky Ezcurra.

Curator Jennifer Burris Staton speaks during the Curator Tour and Opening Reception for the new exhibit.

Francisco Staton (left) and Curator Jennifer Burris Staton (center) speak with Laura McGrane, a professor of English, during the Curator Tour and Opening Reception of the new exhibit.

Visitors take in the mix of mediums at the exhibition.

For more information on the exhibit, which runs through May 1, visit exhibits.haverford.edu/arqueologias.