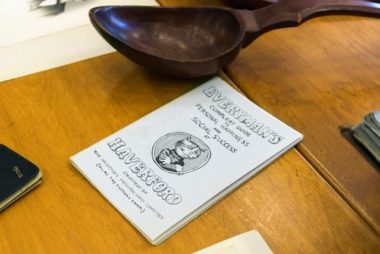 One of the giant spoons awarded to the most “Haverfordian.”

Haverford College Archivist Krista Oldham shares photographs, documents, and other materials about traditions that brought students together as Fords.

Attendees of the presentation “Barbarian Ways of Behavior or Beautiful Ceremonies?” look over historical items. 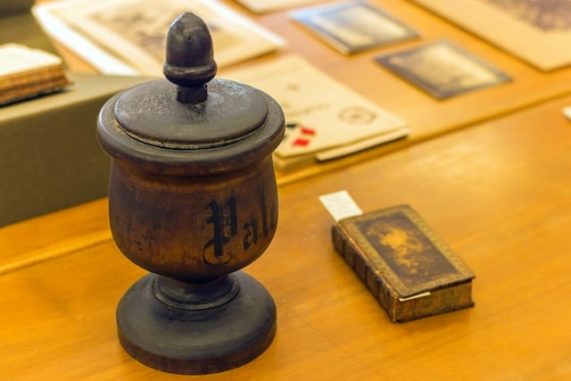 The Paley urn used in the Cremation Ceremony.

Nowadays, one of the biggest Haverford College student traditions is Pinwheel Day, when the colorful spinners mysteriously appear on the Campus Green to mark the unofficial start of spring and Fords take to sunbathing, Frisbee tossing, and sometimes even accordion playing. But back in the day, student traditions ran more, shall we say, to the rough and tumble.

Some of those traditions involved a free-for-all battle over a cane, the burning of a despised textbook, and the creative hazing of freshmen. Oh my!

In a recent Dig into the Archives presentation titled “Barbarian Ways of Behavior or Beautiful Ceremonies? A Look into Haverford Student Traditions,” Haverford College archivist Krista Oldham explored the Cremation Ceremony, Caning Rush, freshman initiation rites, and other traditions through photographs, documents, and historical items. Traditions, Oldham told an audience of about 20 gathered in Special Collections in  Magill Library, “are something people can still relate to on Haverford’s campus. … Regardless of the time, whether it’s the 1870s or now, students always tend to embrace and partake in traditions.” 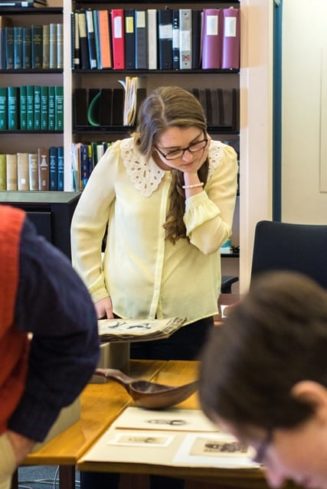 Madison Arnold-Scerbo ’18 takes a closer look at freshmen rules at the presentation on student traditions at Magill Library. 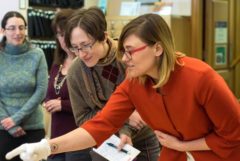 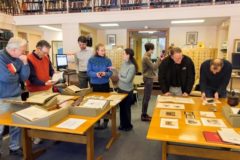 Attendees of the presentation “Barbarian Ways of Behavior or Beautiful Ceremonies?” look over historical items. 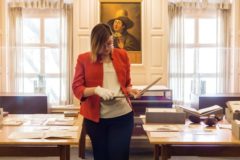 College Archivist Krista Oldham shares photographs, documents, and other materials about some old Haverford traditions, including cane rushes, cremations, and Spoon Men that brought students together as Fords.

Here are some highlights of the more popular and unusual traditions of yore:

The Cane Rush: In the mid- to late-19th century to the early 20th century, freshmen and sophomores waged battle over a hickory stick in front of Barclay Hall or at Walton Field. The team that got the most hands on the stick was the victor. “It’s this big melee,” Oldham said. “You see limbs and bodies in the mix. … Destruction and loss of clothing usually occurred.”

Other rushes included the Snow Rush, essentially a big, ol’ snowball fight. Sophomores also would lay in wait for freshman and then roll them in the snow.

The Cremation Ceremony: Dating to possibly as early as 1836, the tradition involved burning the most hated textbook in the curriculum at the end of the sophomore year. The Class of 1872 chose William Paley’s Evidences of Christianity. Oldham displayed a wooden urn, engraved with the name Paley. It was the oldest item on display during the presentation. “There is some ash residue in there,” she said. Another year, the hated text was a math book.

The tradition was truly a ceremony. A trial of the unlucky text’s author was held. The full-scale dramatic production included students in elaborate costumes that fit a theme. “They took it very, very seriously,” Oldham said. “A lot of time and money was put into the Cremation Ceremony.”

The Spoon Man: In this tradition, which dates to 1873, a large wooden spoon, entrusted to the class for four years, was awarded to the senior considered the most “Haverfordian.” Oldham had two spoons, one nearly 3-feet long, on display.

Freshmen Initiation: Posters with printed rules for freshmen were on display. In one 1906 poster, rules included “hissing is forbidden on all occasions.”

Other initiation practices could be quite harsh, including the Barclay soap slide and vigorous tossing in a blanket of freshmen by sophomores. The goal was to “mold you into that good, obedient, loyal Haverford student,” Oldham said, citing writings from the time. But it also created controversy, with some wondering if it was too much, and led to students transferring out of Haverford.

First-year student Madison Arnold-Scerbo of York, Pa., was intrigued by the old college customs and the evolution over time. For example, freshmen still get a guide on navigating campus life.

“I was more shocked at some of the freshmen initiations,” she said. Suffice it to say, campus newbies have it easier in 2015.