The Honor Code is an intrinsic part of the academic and social lives of every student at Haverford. It was originally suggested in 1896, though it only pertained to test taking at the time. Through the first half of the 20th century, the Honor Code expanded to govern all academics, and opened the way to making all exams self-scheduled and unproctored. In the 1960s and ’70s, the Code took on a social aspect and began to deal with issues surrounding sex and drugs. It has changed many times over the last century as students responded to the relevant problems of their time. For example, this year the following clause was added to the social part of the Code:

The ability of the Code to change lies in the biannual institution of Plenary, a mass meeting that provides an opportunity for students to propose and vote on changes. Every spring, the last proposed resolution at Plenary is to open up the Code to ratification by the student body. Such ratification requires that two-thirds of the students vote in favor.

Students may vote one of three ways: for, for with objections, or against. Of the 881 students that voted this year, 88 percent voted in favor, 9 percent voted with objections, and 3 percent voted against ratification. Regardless of how each student votes, the individual must give a reason for why the vote was cast in that way. The following reasons for ratifying the Honor Code stood out:

1. The Honor Code creates an environment that sets Haverford apart, and creates a place where I feel I am treated with dignity and trust. I <3 Havvie. [“I heart Havvie.”]

2. The code is essential to life on campus. Living in a community with people who have different experiences and viewpoints can always create conflict, but the code serves as a guide to help resolve it. Moving forward, there should be more information and training about successful confrontations, but the code is a great base to build upon.

3. Studying abroad with kids from other schools made me realize how exceptional this thing is.

4. I trust the new wording of the Code and I think it is of benefit to all! I think it’s great that there has been a greater focus on the social aspect of the Code, because it’s something I feel has hasn’t been paid much attention to, even though it’s just as important as the academic honor code. 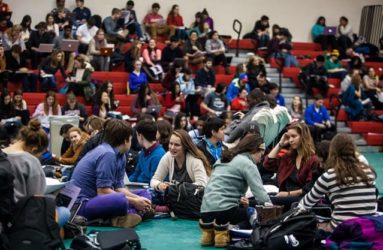 Students hold up the resolutions packet to vote during Plenary 2015 in GIAC Calvin Gooding Arena.

6. Despite its faults, the honor code is a living document that represents the hopes that we can improve our community. Rejecting it is, in a sense, rejecting the bonds that bring our community together.

8. We’re better off with the Code than without it. Though it may not always be followed, it does affect the school in a unique way, if for no other reason than it binds the community to a common ideal and gives us something to strive for. It is also important for students applying to Haverford to have to write an essay about the Code before coming, so they at least consider what they are getting themselves into.

9. I am really proud of the student body for its amendment to the social code, specifying types of harassment and discrimination, that like all such interactions, are against the spirit of our community life. I know we pride ourselves on a flexible code and a lot of folks think that naming specific things, like racism or classicism, takes away from the code’s adaptability and interpretative potential. In a vacuum, I might agree. But we don’t live in a vacuum. We live as a community where some members, in their time on campus and their experiences off campus, are not treated equally. They don’t have the same comforting assumptions cushioning their interactions, and, in general, don’t feel held by the code in the same way that students of greater privilege do. There is power in naming things. And sometimes, regardless of our ideals of free speech and silence, something has got to finally be said. I am ratifying the code, but I am especially ratifying this speaking out.

There were, of course, many more comments than the selection shown here, but the code passed yet again by a strong majority.