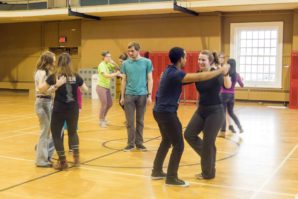 Dancing at the Blues Club meeting in Ryan Gymnasium.

As Stevie Ray Vaughan and then Ella Fitzgerald croon from a laptop playlist, couples twirl, step, and twist in Ryan Gym on this Wednesday afternoon meeting of the new Blues Club at Haverford College. Club founder Chris Pence ’18 takes a few moments to teach the group of students how to move from an inside turn to an outside turn. Then, it’s practice, practice, practice. And, of course, plenty of time for a little social dancing, where students choose a partner and boogie however they like.

What: The Blues Club of Haverford is new this semester.

When: It meets weekly on Wednesdays at 4:30 p.m. in Ryan Gym. About a dozen people have come out to dance, learn new steps from a professional instructor, or from Pence, who hails from Portland, Ore., and to practice. Each meeting also includes time for social dancing. Occasionally, the group goes on field trips. On Feb. 20, the Blues Club traveled to Lindy and Blues (LaB), an organization that puts on dance events in Philadelphia.

Purpose: “It’s partly to learn dancing,” Pence says. “But to me really, it’s about the social—an environment to meet and hang out. I wanted to blues with people.”

Why the Blues? Why not? says Pence, who spent last summer taking lessons for the heck of it. “Blues dancing is easier to learn and more relaxed,” he says. “You can dance the blues to any kind of music.” 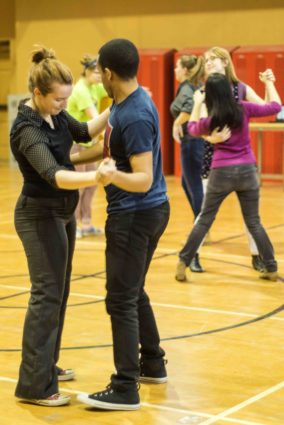 Students dance during the Blues Club meeting in Ryan Gymnasium. 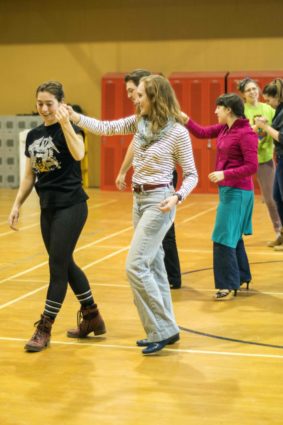 Students practice turning in and turning out during a Blues Club meeting. 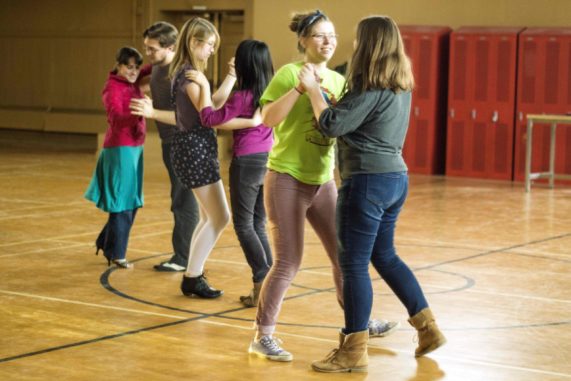 Why join? “It seemed like a cool thing to do,” Anna Saum ’18 of East Northport, N.Y., says during a break from twisting, stepping and laughing with her partner. “It’s a totally different type of dancing then we do nowadays. I like that it’s free form but also has a structure.”

Did You Know? Pence’s favorite blues step is a dip, where the leader drops the follower to a low position that looks like the leader caught the follower from falling over. It’s a common flourish to finish off a dance.