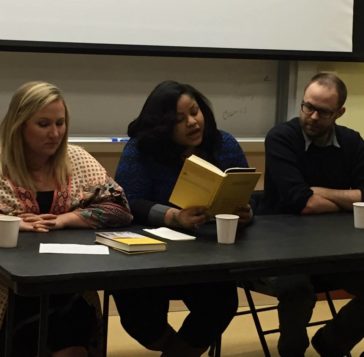 Ashley Jacobs (center) reads from “Inside This Place, Not of It.” 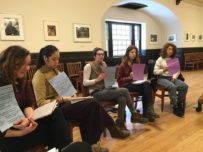 Students participate in a workshop at the Voice of Witness program. They wrote down thoughts about Jacobs’ presentation. 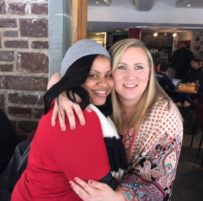 Ashley Jacobs (left) gets a hug from Claire Kiefer.

For a few moments, Ashley Jacobs could not continue reading as her voice choked with emotion. It was a poignant moment for everyone in the audience as we absorbed the silence and contemplated the harsh brutality forced upon this Voice of Witness (VoW) narrator, a former prisoner who was given a six-month sentence for embezzling money to pay her bills.

Jacobs visited Haverford College on Feb. 20 to talk about the underrepresented experiences of abuse against female prisoners like her, the struggle for social justice and prison reform, and her own experiences in the U.S. prison system. The event was sponsored by the Center for Peace and Global Citizenship (CPGC), which annually sends two summer interns to work at VoW. The San Francisco based non-profit  provides an empathy-based understanding of some of the most pressing human rights crises around the world through its book series based on oral histories. (The talk was preceded by an Oral History Workshop led by VoW.)

Jacobs, who was pregnant with her third child while imprisoned, read an excerpt about the ordeal from the book Inside This Place, Not of It: Narratives from Women’s Prisons. For her, clearly, the hardest part came while reading about her Caesarian section, a procedure she says was forced and medically unnecessary and done while she was chained to an operating table. Afterward, her baby was taken away, and she was sent back to prison.

“It felt like my baby was dying, that I was abandoning him,” she struggled to read. “I felt like I owed it to him to be there, and I wasn’t. I felt like maybe he would hate me, or resent me, or when I got home, he wouldn’t know who I was. It hurt. It just hurt.”

Just like the other stories in the book, Jacobs’ is a terribly powerful one. Terrible because of the events she had to go through in life: abandonment by her mother, teenage pregnancy, forced evacuation from New Orleans after Hurricane Katrina, and her sixth-month prison sentence that also included nine years of probation.

But hers is also powerful because it is humbling; despite the abuse she went through, Jacobs defies being seen as a victim. Her story also illuminates the struggle for justice, especially by one who has most closely suffered social and political injustices and continues to battle them in everyday life. Despite this, she currently works toward getting anti-shackling laws passed in the U.S.

Jacobs was accompanied by Luke Gerwe, who is the managing editor of the VoW book series, and Claire Kiefer, VoW’s education program associate who also is dedicated to prison reform and education. Gerwe and Kiefer talked about the problems in the prison system, explained the process of obtaining and editing oral histories, and about the work they do at VoW.

“Oral histories are tricky to tell. Crises reduce a person to the status of a victim,” Gerwe said. “But oral histories need to have a beginning, middle, and an end–not just focus on the moment of crisis, because this does not give them the full richness that they deserve.”

Toward the end of the talk, Jacobs added: “[Claire] gave me a voice. For me, [the oral history] was therapy. It was something that I needed.”

In addition to the criminal justice system, VoW’s book series program uses oral histories to illuminate social justice issues that include experiences of living under oppressive regimes in Burma, Zimbabwe, and Columbia, post-Sept. 11 civil rights, and, most recently, life under occupation in Palestine.