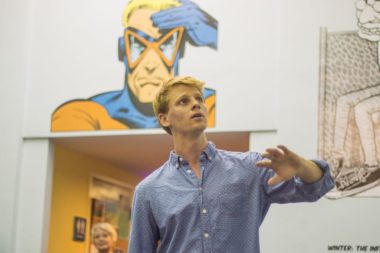 Curator Charlie Espinosa ’15 discusses the exhibit “Archetypes of Change” during the opening reception earlier this month.

Students flip through comic books at the “Archetypes of Change” exhibit at the Magill Library.

Visitors are able to create their own comics using an iPad app. 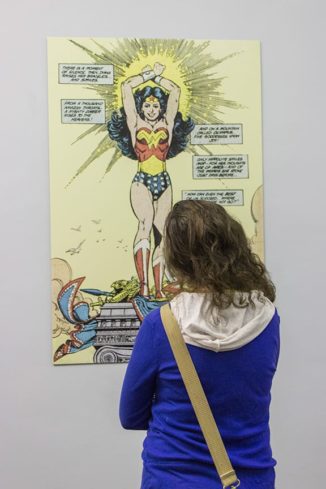 Wonder Woman was one of the superheroes featured. 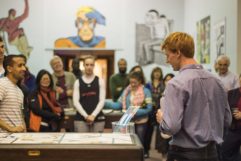 Curator Charlie Espinosa ’15 talks about the exhibit “Archetypes of Change: The Evolving Comic Book and its Heroes.” 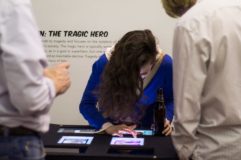 Making comics at the Magill Library. 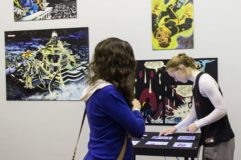 A student creates her own comic using an iPad app at the reception for the “Archetypes of Change” exhibit in the Sharpless Gallery at the Magill Library. 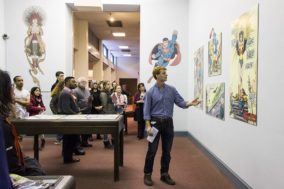 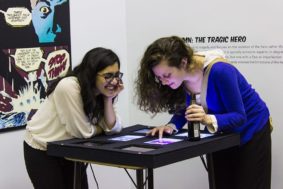 Students enjoy making their own comics at the “Archetypes of Change” exhibit.

The X-Students may not wear tights or flowing capes, but they did flex their own kind of superpowers on the Haverford College powers to be. Named after the comic series the X-Men, the X-Students get credit for Magill Library’s comic-book collection that started in 1985.

The story goes that it took some convincing to persuade a doubtful dean that having comic books in the library wouldn’t prove a distraction. Showing said dean some Fantastic Four stories with quotations from the Bard purportedly clinched the deal. Since then, the collection, housed in the “comic-book corner” in Magill’s basement, has only grown. In 2013, those holdings expanded dramatically when Brian Poon ’93 donated more than 1,600 comic books (!) and more than 20 graphic novels. According to Librarian of the College Terry Snyder, Poon was inspired by his fond memories of the comic-book corner, which he says “offered a nice break from the intensity of research and study.”

Now the collection has inspired an exhibition in Magill titled Archetypes of Change: The Evolving Comic Book and Its Heroes. Curated by Charlie Espinosa ’15, along with Shahzeen Nasim ’16 and Nate Rehm-Daly ’16, the show traces the evolution of comic-book heroes from classics such as Superman and Wonder Woman to more reluctant and tortured heroes such as Nexus (appointed “the conscience of humanity”), Black Orchid (an eco-conscious plant-human hybrid), and Negative Man.

“Being a curator is kind of like being the director of a movie,” says Espinoza, an anthropology major and environmental studies minor. “I provided the guiding creative vision and some oversight, but a huge number of people used their own wonderful talents to actually realize the project.” He relied on the help of two advisers, Jeremiah Mercurio, research and instruction librarian at Magill, and Dean of Multicultural Affairs Theresa Tensuan, a former Haverford English professor whose scholarship has focused on comics and graphic novels. Also key were library staff from Special Collections, Digital Scholarship, and Conservation.

The show also features a cool website and an ingenious “make your own comics” opportunity. The latter consists of two white erase board tables divided into comic panels and supplied with adhesive cutouts of various heroes, captions, and speech bubbles. “The viewer can arrange these images as well as draw in the panels to make their very own comic from the source material of the exhibit,” Espinoza says. A digital option allows visitors to devise comics on a platform called Comic Life and offers a number of heroes and images from the exhibit, as well as the ability to incorporate the visitors’ own photos. “With all these heroes and images at your disposal,” says Espinoza, “you can make a pretty entertaining and subversive story, which is our hope.”

Archetypes of Change: The Evolving Comic Book and Its Heroes runs through Sept. 7. For more information, go to ds.haverford.edu/comics/.