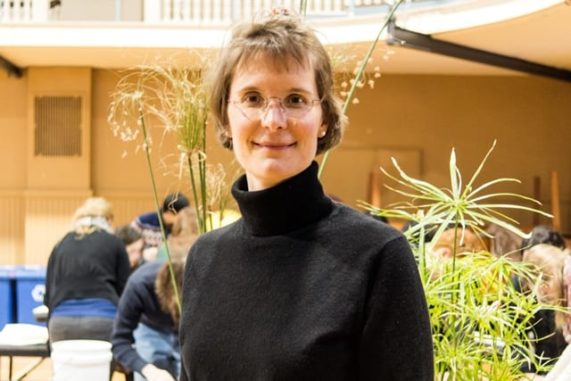 Haverford College junior Emma Lumeij ’16 dips her hand into the tub of cold water and extracts a six-inch sticky strip of yellowish-brown papyrus. She places it vertically on a square of cotton fabric, overlaying each strip a couple of millimeters. When she has created an 8-inch-wide block, she places 8-inch-long strips on top, horizontally.

“I’ve never done this before,” says Lumeij, who is majoring in English. “It’s really interesting.” The 14 students attending the Feb. 18 Papyrus Workshop are taking either “New(s) Media and Print Culture” or “The Future of the Book in the Digital Age.”

“Papyrus making had died out in Egypt and was brought back in the 20th century for tourists,” says Ruffin, a 1994 graduate of Bryn Mawr College who majored in philosophy at Haverford. Yet, it is “the dominant support for written texts for 2,000 years.”

In fact, she notes that Bryn Mawr has ancient fragments of papyrus in its collection with Arabic and Greek writing that’s still visible. “It’s so simple and durable,” she says of papyrus. “It’s beautiful. It comes from a natural plant source.”

As Ruffin instructs, the students assemble pieces of papyrus. Then each square is covered with a piece of cotton and a rolling pin or roller is used to gently squeeze out excess water. Finally, the piece is placed between blotting paper and then weighed down with blocks and bound with elastic bands to add pressure while it dries over a couple of days.

For Lumeij, the project is a hands-on way of exploring “New(s) Media and Print Culture,” in which students discuss the impact form has on content. “The form, whether papyrus, the computer, or the book, changes how we read and our understanding of what we read,” she says.

Classmate Eileen Morgan, a senior at Bryn Mawr College majoring in English and history, says she enjoys experiential learning. “It’s difficult to study culture distant from our own, temporally, and wrap our head around it,” she says. “It’s hard to know what their life was like. But you can get access to people by doing the things they do.”

Associate Professor of English Laura McGrane, who teaches “New(s) Media and Print Culture,” partook in the exercise as well. “By getting hands on here,” she says, while piecing together her square of papyrus, “it asks us to think about how to get hands on with digital culture.” (Perhaps an e-book making workshop next?)

The students in her class will take the hand-made papyrus and use it for in-class projects, cutting and writing on it.

Ben Burke ’18 is taking “The Future of the Book in the Digital Age,” where the class is studying the evolution of the book. “It was interesting,” he says, as he left his piece of papyrus for drying, “to see the labor involved.”

Egyptian Papyrus plant, which is used to make papyrus scrolls. 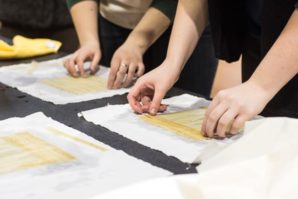 Students layer strips of papyrus to make a scroll during the workshop lead by Mellon Creative Resident and Director of Book Arts at Wellesley College Katherine Ruffin. 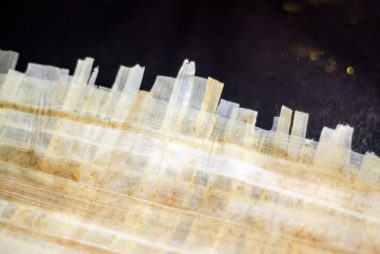 A sample of papyrus made with Egyptian fiber.

A paper press used to dry and compress papyrus—the last step in the process.