On Friday, I had the honor of running once again the LoveShack, a truly Haverfordian tradition that Fords Against Boredom (FAB) sponsors. The idea is simple. We provide graham crackers (instead of the traditional gingerbread), icing, and a myriad of different candies, and teams as large or small as they wish can spend time making whatever creation they choose. Imagination abounds. Fifty Fords came out to make a jungle tree house, a pyramid,  Founders Hall and many more construction confections.

It was a fun and tasty way to spend a portion of Friday night. But, we also gave out prizes! Each winning team received a $15 dollar gift certificate to Wawa. Sweet! Fords vied for Most Haverfordian, Most Romantic, and, new this year, Most Structurally Sound. This last was determined by Sebastian Dilones ’18, who took great joy in shaking every table to simulate an earthquake.

Originally, the event was gingerbread house making and took place shortly before winter break. The year before I arrived, it was moved to mid-March and was St. Patrick’s Day themed, and finally, my first year at Haverford, FAB moved it to its rightful place in February, renamed it, and put me in charge.

In past years, winners have included elaborate hearts, haunted forests, the Super Bowl, and the Duck Pond. This year, there were many great contenders. The prize of Most-Haverfordian, of course, had to go to a recreation of Founders Hall made by Lauren Pronger ’18 and Linyi Chen ’18. But the first years on my hall, Maggie Steinberg ’18 and Mandy Levine ’18, deserve a special mention for carefully recreating the common kitchen area of Apartment 34, piles of rubbish accurately, though embarrassingly, included. Most Romantic was awarded to a beautifully decorated cottage, though it suspiciously looked to be right out of a Hansel and Gretel tale. Finally, a team with two students considering the engineering program, Andrew Hunter ’17 and Kevin Connolly ’18, as well as Jenna Brower ’15 and Miranda Lingenfelder BMC ’17 managed the impressive feat of a large tree house supported by a single pillar. Yes, it was the winner of most Structurally Sound—only a lone candied frog fell even though Sebastian was giving it his best!.

FAB runs events every weekend. Earlier this month, it held the Dating Game, a game show-style competition. The same weekend as LoveShack, a bus took students to SkyZone for a trampoline filled afternoon, and a fancy Oscars watch party was held on campus (Go Birdman!). FAB is all about fun in a non-alcoholic way. So come out for Quizzo, Ben and Jerry’s Bingo, cooking classes, Dining Center Iron Chef, musicals, plays, and, of course, next year’s LoveShack. 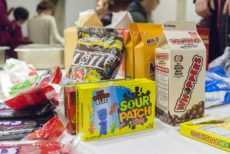 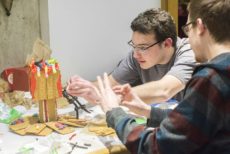 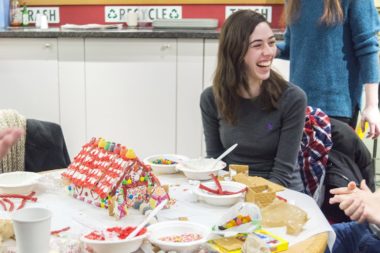 Wonder if this candy cottage could use more candy?

Fords hard at work at LoveShack. 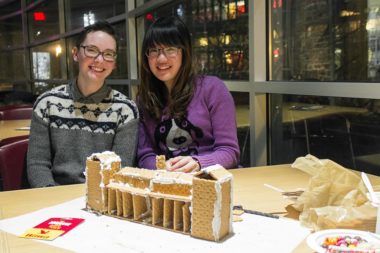 Lauren Pronger ’18 and Linyi Chen ’18 with their recreation of Founders Hall. It’s a winner!