Last week, groups of Fords trudged along with their blankets, pillows, snacks, and homework to attend the annual spring Plenary, Haverford’s bi-annual tradition held in the GIAC’s Calvin Gooding Arena. Students whirled through nine resolutions, covering the Honor Council, alcohol policy and more, and passed eight of them in three hours. The resolution that did not pass, “Eliminating Gender Categorization in Freshman Housing,”  was much debated. It proposed to “give the option for freshmen to live with a roommate or suitemate of a different gender, and have a better match with other students,” as one of its authors, Matija Lagator ’17, described it.

But according to Haverford’s independent, student-run newspaper The Clerk, a prolonged pro/con debate over implementation issues, in part, blocked the resolution from passing. 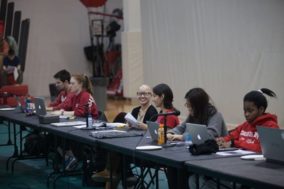 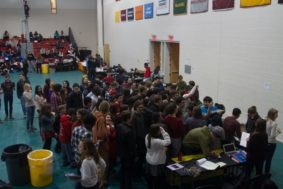 Students crowd around a table during a cookie break at Plenary 2015 in GIAC Calvin Gooding Arena.

This past weekend, after Plenary, the Honor Code also was ratified, with 88 percent of those voting in favor of the Honor Code with no objections, and three percent voting against its ratification. Students’ Council Co-President Claire Dinh ’16 co-authored Resolution #7 on “Gender-Neutral Language in the Students’ Constitution,” which changed the wording of Haverford’s Constitution to be gender-neutral and inclusive of those who may not identify with the pronouns “he” or “she.”

“It was unfortunate that before this resolution passed, the language of our Constitution did not adequately reflect that value of respect we have for all of our peers here, regardless of their gender identities,” Dinh said. “Now, the Constitution truly belongs to all of us, and we have joined other college communities like Pomona College and Oberlin College in showing support for the LGBTQ+ community.”

Another important resolution that passed was an amendment to the Social Honor Code proposed by Haverford’s Transformative Inclusive Diversity Engagement (TIDE) group which sought to make clear that any type of discrimination is a violation of the Code. It read: “We recognize that acts of discrimination and harassment, including, but not limited to, acts of racism, sexism, homophobia, transphobia, classism, discrimination based on religion or political ideology, and discrimination based on national origin or English capability are devoid of respect and therefore, by definition, violate this Code.” This resolution was much discussed on the floor, and in The Clerk.

The remaining six resolutions addressed confrontation, Honor Council transparency and procedural methods, the alcohol policy, and the responsibilities of Students’ Council and the co-treasurers. New this year, Honor Council is bringing back a tradition of hosting Post-Plenary discussions during which students can chat, discuss, and clarify concerns about the Honor Code, the student body, or the resolutions passed during Plenary.

Plenary wasn’t all serious debate. Proceedings were  interrupted with a brief but ludicrous moment of gluttony when students swarmed like bees toward the entrance doors as soon as Dinh and Students’ Council Co-President Maria Bojorquez-Gomez ‘16 announced the arrival of the much-awaited Insomnia cookies. “Claire called, ‘To the right!’ but students moved like a wave to the left,” said Bojorquez-Gomez. “The excitement for cookies was incredible.”

Plenary is a bi-annual tradition of the student body, which convenes to discuss and debate on-campus issues, including the alcohol policy (ratified in the Fall) and the Honor Code (ratified in the Spring). Students present resolutions and amendments, which are discussed on the floor and are followed by a show-of-hands vote. Students’ Council is then responsible for making sure presenters carrying out the approved resolutions and amendments. 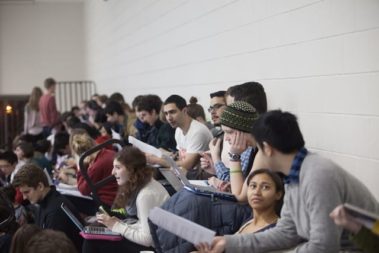 Students hold up the resolutions packet to vote during Plenary 2015 in GIAC Calvin Gooding Arena. 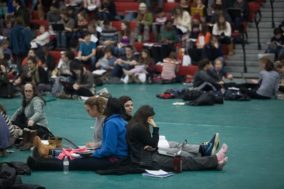 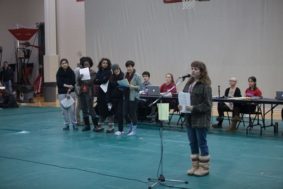 Students wait in line to discuss a resolution.

Please see David Roza’s article in The Clerk for more information about the plenary resolutions.