There is always something happening on the Haverford campus on a weekend, and last Friday night was no different. Five different student events were held, including a DC Iron Chef  cook-off, Meat Snarf’s improvised comedy show, a community contra dance, a meeting of the League of Legends Club, and an a capella concert starring the Humtones and the Ford S-Chords.

Fords Against Boredom (FAB) presented Haverford’s very own DC Iron Chef, back for a second year. Inspired from the popular Food TV show Iron Chef, Haverford’s version pits four teams against each other in a cooking competition with a secret ingredient (Friday’s was sunbutter). The student-chefs were evaluated by a panel of hungry campus judges, including President Dan Weiss and Dean Martha Denney. 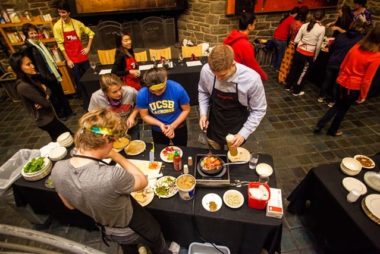 Sunbutter was the secret ingredient at DC Iron Chef. 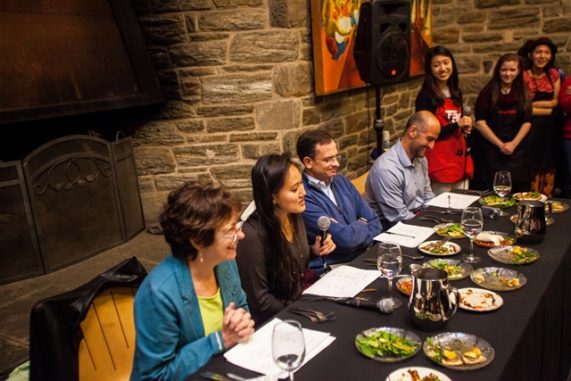 Those who ate too much had an opportunity to work off the calories with laugher at “Meat Snarf: Two-Man Improvised Comedy with James and Jake,” an hour-long improv show presented by James Burvant ’15 and Jake Hazen ‘15.

Soon after, the “The Hums-Chords: Male Midsemester Mayhem” began in Zubrow Commons. Haverford’s two all-male a capella groups, the Humtones and the S-Chords, came together for a lively night of singing and skits that promised “you’ll be partyin’ like it’s 1979” (the year before Haverford went co-ed). A capella, though only a 30-year old tradition on campus, has gained tremendous momentum, and Haverford can now boast of having more a capella groups per capita than any other school.

The League of Legends weekly club meeting was also held on Friday, with fans of the popular multiplayer game convening in Hilles 109 for some online battles. 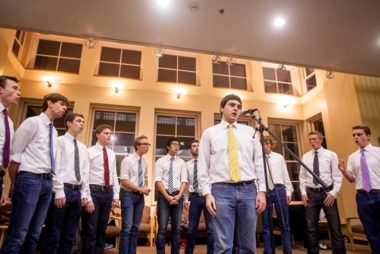 The audience enjoying the performances.

The League of Legends Club.

Facing off at League of Legends.

As if that wasn’t enough of a jam-packed scheduled, the College’s second community contra dance was also held Friday night. Contra is a traditional New England folk dance in which couples jig in groups of four or in two lines facing each other. The event, which was organized by Haverford’s Folk Club and open to the Tri-Co community, began with a short lesson for beginners and was followed by hours of dancing. The Folk Club holds weekly dances on Monday nights, featuring introductory lessons and performances of contras, square and circle dances, and Waltzes. Folk singing is also involved. 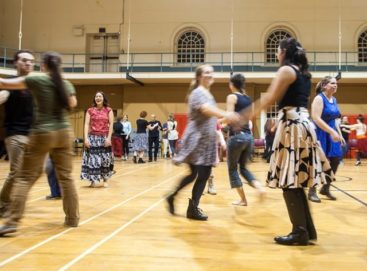 Dancing a contra in the Old Gym.

The band at the dance.