“I have been waiting for 50 years for something good to come out of Vietnam, [and] tonight is the first night it has happened.” That was a comment from an audience member at “The Vietnam War in Poetry: Ancient History or Prescient Harbinger?” a poetry reading organized by President Daniel H. Weiss on Veteran’s Day, November 11.  The event, held in Sharpless Auditorium, was filled with energy, as members of the Tri-Co community and local residents listened raptly to the deeply personal poems and insights of six American poets whose lives and careers have been influenced by their direct participation in the Vietnam War, either as soldiers or as conscientious objectors.

In his introduction, President Weiss spoke about how he had first encountered the work of a Vietnam war poet, Major Michael O’ Donnell, 15 years ago. O’ Donnell was shot down in the jungles of Cambodia while on a rescue mission, and his body was found and buried three decades later in the Arlington Cemetery. Weiss then quoted a few lines of O’Donnell’s poetry:

“When men decide and feel safe/ to call the war insane,
Take one moment to embrace/ those gentle heroes you left behind.”

This interest in O’ Donnell’s poetry and the American experience in Vietnam in the 1960s led Weiss to a deeper engagement with the poetry of this war and the work of the six poets invited to read from their work at Haverford. The reading was part of a two-day event, which included a panel discussion the next day.

Each of the six has been widely published. John Balaban, a conscientious objector, is the author of 12 books of poetry and prose, including, Locusts at the Edge of Summer and Path, Crooked Path. His work has won many awards, including the Academy of American Poets’ Lamont prize and the William Carlos Williams Award from the Poetry Society of America.  D.F. Brown’s published work includes, Returning Fire and The Other Half of Everything.  David V. Connelly, the author of a collection of poems Lost in America, runs creative writing workshops for Iraq, Afghanistan, and Vietnam War veterans, and his poetry appears in the documentary film Voices in Wartime. Joseph T. Cox’s poetry and essays have appeared in numerous journals, and his second book, Garden’s Close, was published in 2002.  W.D. Ehrhart, is the author or editor of 21 books, including the poetry collection Beautiful Wreckage, the memoir Passing Time, and the essay collection The Madness of it All. And Dale Ritterbusch, has published two books, Far from the Temple of Heaven and Lessons Learned, and teaches creative writing and literature at the University of Wisconsin-Whitewater and the United States Air Force Academy. 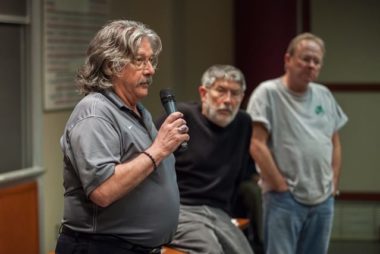 Attendees listen to the public readings.

Attendees at the reception following the public reading.

Though it was a poetry reading inspired by war—a literary sub-genre dating back at least 4000 years—the poets onstage dealt with the tragic and personal consequences of conflict rather than the political implications, touching on such topics as  post-traumatic stress disorder, familial relationships, loneliness, love, and the meaning of home.

In his remarks during his reading, poet John Balaban observed that of the more than 100,000 civilians per year who died in the Vietnam War, 60 percent were children under the age of 16.

He then read his poem “After Our War:”

“After the war, with such Cheshire cats grinning in our trees,
will the ancient tales still tell us new truths?
Will the myriad world surrender new metaphor?
After our war, how will love speak?”

The audience also got the chance to exchange comments and questions with the poets during a short question and answer session at the end. One audience member took the opportunity to ask for forgiveness for thinking ill of Vietnam War veterans and not giving them a proper welcome home at that time. There was even a little surprise, as Balaban, who is also a translator of Vietnamese poetry, concluded the reading with a poem in Vietnamese, “Spring-Watching Pavilion” by 19th-century female poet of Vietnam Ho Xuan Huong.

Watch a video of the readings:

Watch a video of the Q&A: