What do you get when you cross courses in anthropology, classics, French, sociology, and visual studies with a passion for creative expression? The answer, this semester, is a campus full of art. In addition to students preparing for final exams, two popular study spots on campus are full of colorful and diverse artwork from students in six different courses as part of five different course-related exhibitions that opened last week.

Bodies Assembled is the result of two different courses—Visiting Assistant Professor of Sociology Shelly Ronen’s “Sociology of the Body” and Visiting Assistant Professor of Classics Hannah Silverblank’s “Androids and Animals in Greek and Latin Literature.” As part of the Philadelphia Area Creative Collaborations (PACC) program sponsored by the John B. Hurford ’60 Center for the Arts and Humanities, Professors Ronen and Silverblank took their students along for a semester-long engagement of the body as a site for academic analysis.

On Dec. 5, Silverblank’s students performed a collaborative reading of an original play with actors from local nonprofit Acting without Boundaries and students in her course. And Ronen asked her class to transform their learning into a visual art piece for the community to explore in Lutnick Library.

“I hope students will get a sense of the impact of their individual work as it is open to the public, a celebration or culmination of our own semester-long exploration of the themes,” said Ronen. “I also hope they will see how individual thoughts and projects are enriched by being in conversation with those of their fellow students and artists.”

Across Founders Green, four more openings in VCAM added to the creative energy of the day. (Continued after the gallery.) 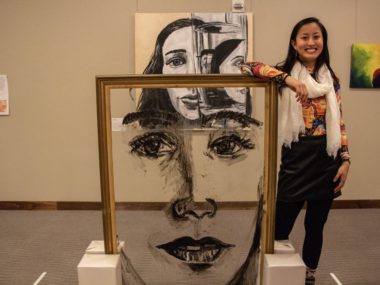 “Reflectory” by Lyvia Yan ’23 in the “Bodies Assembled” exhibit in the library. Photo by Arshiya Bhayana ’22.

“Exterior Attempt, Interior Motive” by ‘Taiwo Fayemi ’22 in the “Bodies Assembled” exhibit in the library. Photo by Arshiya Bhayana ’22

Students present their work in the “Art of the Anthropocene” exhibit in VCAM. Photo by Claire Chenyu Wang ’20.

Joe Spir ’20 presents his work in the “Art of the Anthropocene” exhibit in VCAM. Photo by Claire Chenyu Wang ’20.

Students present their work in the “Art of the Anthropocene” exhibit in VCAM. Photo by Claire Chenyu Wang ’20.

Lots of wearable art was on display at the “Data-Body, Body-Data” exhibit. Photo by Claire Chenyu Wang ’20.

Lots of wearable art was on display at the “Data-Body, Body-Data” exhibit. Photo by Claire Chenyu Wang ’20. 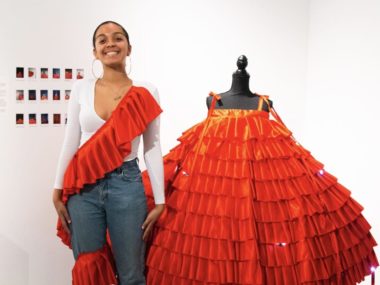 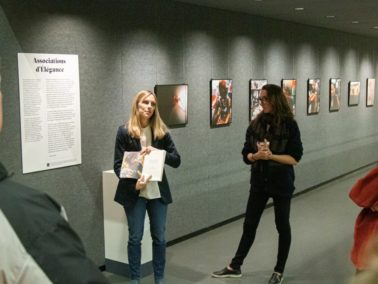 Senior Lecturer of French and Francophone Studies Katy Corbin with Nigerian-based writer and photographer Allyn Gaestel ’09 at the opening of “Associations d’Élégance” in VCAM. Photo by Claire Chenyu Wang ’20. 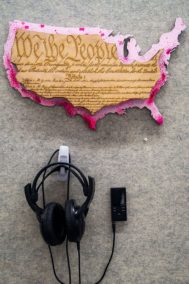 One of the pieces on display in the “Visualizing Border/lands” exhibit in VCAM. Photo by Patrick Montero. 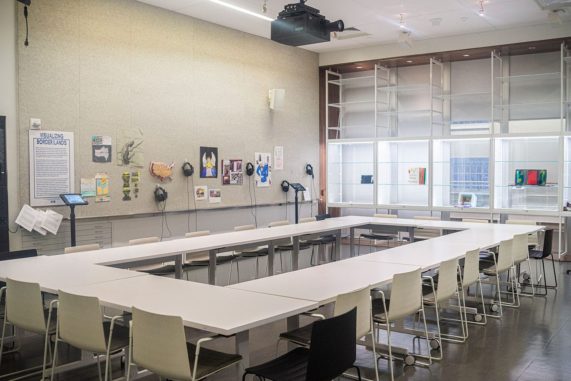 An overview of the “Visualizing Border/lands” exhibit in VCAM. Photo by Patrick Montero.

“Visualizing Border/Lands” is an anthropology and visual studies course taught by Mellon Post-Doctoral Fellow and Visiting Assistant Professor of Anthropology and Visual Studies Elena Guzman. The course focused on understanding borders, both physically and abstractly, as barriers to understanding one another as humans. Students represented this in a variety of ways — from laser-cut maps personalized with text of the United States Constitution to collages of a student’s close friends and loved ones. Joseph Spir Rechani ’20, an anthropology major and visual studies minor, created a children’s book that used audio interviews with international students at Haverford with help from the College’s bookbinding lab.

“The book, titled Do you know my name?, stemmed from an autoethnography we had to write for the same class, which I wrote about my name and how it creates identity, difference, and borders,” said Spir. “This book expands it to 14 international students from Haverford, each with their own experience with borders, border-crossing, and how their name – something pretty superficial but also crucial in defining who someone is – played a role in their process of being in the United States and studying far away from home. The book is coded so that anyone, including children, could easily understand it and be entertained.”

Students in Senior Lecturer of French and Francophone Studies Katy Corbin’s course “Grammaire Avancée, Composition, et Conversation: Tous Journalistes?” have been thinking critically about the press, its message, and the way stories are crafted, as they work to improve writing skills in various journalistic genres. As a manifestation of this work, Corbin invited  Nigerian-based writer and photographer Allyn Gaestel ’09 to campus.

The resulting exhibited photography series, called Associations d’Élégance, was made in Kinshasa, Democratic Republic of Congo, in August 2018. The series explores notions of filtration and portraiture as a relationship.Through portraits of the leaders of collectives of sex workers, and its accompanying textual reportage, Gaestel’s work explores the questions of objectivity and journalism that have been the focus of study for Corbin’s students.

Visiting Assistant Professor of Visual Studies Yvette Granata asked students in her “Body Media: Wearable Technology and Digital Bodies” class to display their wearable creations themed around the relationship between the human body and technology in their final creative exhibition, Data-Body, Body-Data.

Students produced a variety of works, including “Subconscious Sense for Wifi Networks” by computer science major Will Harris-Braun ’22.

“My piece is a wearable vest-like structure with 3D-printed mechanical tentacles coming off the back,” he said. “They are controlled by a microcontroller with Wi-Fi capability, so they move in response to changes in the strength of surrounding Wi-Fi signals. The idea of the project is to link modern environmental dangers (to privacy, for example) into the innate senses humans have for the environment, but which don’t function well on these new technological layers of our reality.”

For students who choose to pursue an interdisciplinary  minor in visual studies, the capstone seminar taken during senior year represents the culmination of their work in the program. This semester, Director and Assistant Professor of Visual Studies Erin Schoneveld led that capstone class, “Art and the Environment in East Asia.”

“[The] capstone investigates the epoch known as the ‘Anthropocene’ in which humans have become the major force determining the continuing livability of planet earth,” said Schoneveld. “Within this geologic temporality students in the course consider the cultural and geographic region of East Asia, broadly defined, and the ways in which communities embrace socially engaged practices of art and science, to confront issues of climate change, global warming, pollution, sustainability, the ecologies of disaster, and extinction.”

In the related exhibit, Art of the Anthropocene, Schoneveld’s students created work designed to engage the campus community with the impacts and consequences of climate change, both environmentally and socially. Spir, also a student in the capstone seminar, drew from his experience with the KAKEHASHI Project, which took him to Japan during the prior semester’s spring break.

“I did a project titled 便利-ing machine, a toy vending machine that contains 3D-printed, PLA capsules filled with succulent dirt mix and seeds that people can buy if they have two quarters to spend,” he said. “便利-ing machine does a take on material consumerism and vending machine culture in Japan, and 便利 is a Japanese word that means convenience, getting a sense of the accessibility of vending machines and their fast-paced, humanless interactions. The underlying question that 便利-ing machine presents: can we capitalize on vending machines in a way that not only helps a waning population, but also a world in environmental decay?”

All five visual art exhibits will be on display through the end of this semester. Check out Art of the Anthropocene, Visualizing Border/lands, Associations d’Elegance, and Data-Body, Body-Data in VCAM and Bodies Assembled in Lutnick Library.