Here’s what Guzman has to say about her course:

This class asks students to engage with the visuals of borders. Borders depend greatly on visuals to create an image that marks here from there. For example, a sign that says, “You are now entering the United States” marks what is the United States and what is considered beyond it. In that same vein, people react to borders with their own images and performances that challenge and sometimes reinforce the borders. Take, for instance, when an artist who creates an image of a hole in a physical border barrier. This course attends to these visual aspects of borders while also asking students to visualize the borders they live in and engage with everyday. Through various visualization exercises—mind mapping, annotated maps, and photo essays—the students both understand and portray the borders they are learning about in class.

Ultimately, what I hope students take from this class is a deeper understanding of borders, both physical and ideological, while also using their critical-thinking skills in visual ways.

My research focuses on borders, in particular the southern border of Haiti and the Dominican Republic. My extensive experience there made me realize how visual borders were. It was less so the physical barrier that served to demarcate here from there, and more so the visuals: the armed border patrol guards, the large flags placed at the barriers, the statues and street names en route to the border. Each of these visuals had the purpose of making distinctions between the two countries. Additionally, as a filmmaker, I was interested in exploring how to pedagogically merge creative forms with theory. This course was created as a way to get students to think visually, in other words, to imagine ideas and text in creative and experimental ways. 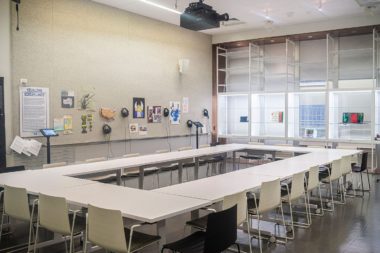 An overview of the “Visualizing Border/lands” exhibit in VCAM. Photo by Patrick Montero.

See what other courses the Department of Anthropology is offering this semester.